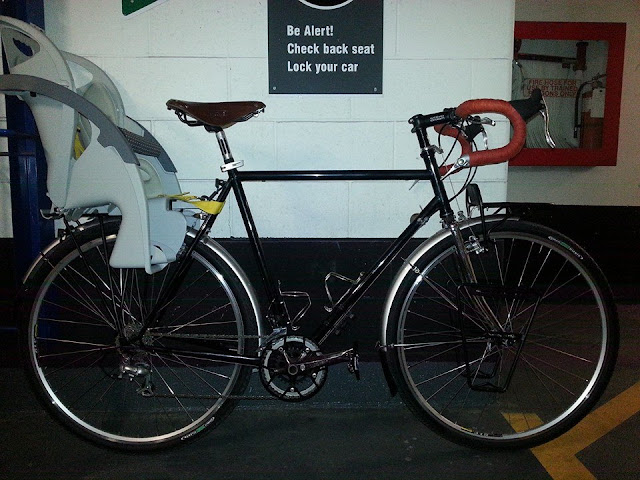 It lives! My Franken-bike creation: breeder-touring/monster-cross. AKA, 'The Beast'.  The final iteration?  Proves the truth of evolution: 'survival of the most adequate'.  That's a Blackburn Co-Pilot Limo child seat.  The recline's nice, as the young tend to pass out in motion.  Previous write-up follows.

A new build up from new and old parts.  It's my take on the 'gravel mutt' idea: build a wide-tired rough roads bike as reasonably as possible from your parts bin.  Between the three bikes I have, I've now rebuilt almost every section of a bike, a few times.

The bike's been useful, if heavy.  My wife gave me the money for it as a present in return for her engagement ring: Japanese custom is to give half-back gifts, yeah!  It's been a fixed/free, singlespeed and a 1x5.  I learned enough from it about fixed/free to buy and build a lighter fixed/fixed, and that singlespeed is pointless.  As I have a paved- 'road bike'; this will be my unpaved road, and winter conditions bike.

It's not as economical as 'off the peg', but it is more economical than letting what I had go to waste, besides I wanted to keep the bike my wife bought for me, in some identifiable form.  A friend told me a Canadian Air Force story: you can crash and destroy every part of a plane but it's identification plate, and there's money in the budget to rebuild it, but there's no money in the budget to buy a new plane, even if that comes cheaper.

Since all that is left original is the following, it's a 'tour-mutt':
- touring frame and fork
- Brooks B17N saddle, seatpost and clamp
- headset and stem
- Tektro brake levers and rear low-profile cantilever brake
- Shimano pedals, one side clipless and one flats
- budget racks

I repurposed:
- the triple crank from my Lemond Croix de Fer, and its 26t chainring
- its Shimano 105 triple derailleur (used now as wide-range double)
- a 44t chainring from my fixed/fixed
- 37mm Schwalbe Silento tires from my wife's bike (gave her better rolling ones for pavement)
- parts to make a Shimano 105, 10-speed, 12-27 cassette
- downtube cable-stops

The build was epic in its delayed pace, back-tracking, reverse-engineering, and international sourcing (Canada, Japan and the US).  I could nearly start a business in bikes, if only there were any living in aught but schilling carbon 'dentist bikes'.

It will see use on local unpaved roads, and winter conditions, and I hope further afield.  Maybe even to pull kids in a trailer, as the cross brake levers begin to make it safer to do so.  There's room in that fork of 55mm: I could run 47mm tires for very poor road, so long as I push the fenders higher.