It did work before the Internet, because there was no Internet. 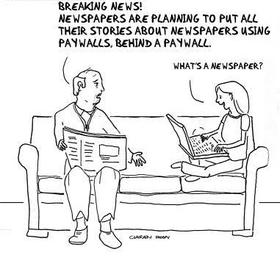 More proof sometimes a thing deserves to fail: like Blackberry.  Rooting for stupid leaves you with stupid, whatever its outcome.

All of Canada's larger papers have gone behind paywalls.  Japan Times too, but no loss there.  The Star and the Globe used to be decent papers decades back, yet before the quality of each went into tailspin from financial cuts, the Globe had turned into Conservative Party press releases, and The Star's criminally pimped our housing bubble as much as any other organization.  To think I'd considered a journalism degree, whatever the hell the content of said is.  Bullet well dodged considering boomer journalists have kept their jobs, secured a few for their kids, but journalism graduates have worse chances than teaching graduates now have, for a job without benefits, security or more status than whoring for heroin.

As private companies, albeit shilling public information, they have 'the right' to run their business into the ground: none of these papers will exist in any form in five years.  Other than spite, I don't see what a paywall achieves for a paper?  You piss me off with your pop-up, so you think I'm going to pay?  Well, I can get international news from anywhere, and Canadian news from somewhere not controlled by Canadian business interests, or muzzled by its Neo-Con owners.  Sure, wrinklies like my mother might pay, but she's dead in fifteen years, losing her eyesight and attention span already, and 'on a fixed income'.  Good luck with that demographic.

Besides, once I tell my mother to hit the stop button as The Star article loads, before the pop-up, she's golden.  (Japan Times: use another browser.  Etc.).  Fucking idiots.  Paid viewing is over; getting eyeballs for advertisers is not.  You think I'd heard of the Guardian before I'd gone online?  You think millions more had before the Snowden scoop?  Yeah, journalism brings them three million hits a day.
Posted by Ἀντισθένης at 21:25