"Fat, dumb and stupid," a good friend describes his drinking and eating habits.  I respect that.  Everyone has a poor habit, or ten, but denial is not an acceptable one.

Denial is North America, and I won't even go to politics, 'culture wars', voting against your class interests...  If you've too short an attention span for a full education:
Back on subject...  North Americans are fat, dumb and stupid, because they are in denial of how they've been manipulated, how easy that is, and how little will power it takes to free themselves, yet are too lazy to summon even that.  America's average weight is 180lbs: five more than mine, a male, 6'+, in my forties, and not underweight, but spot on for my BMI.

Here's the thing: if you eat shit, drink shit, mortgage your ass to buy a shitty house in a shithole and drive miles in your shitbox from there to your shitty job, this is what you become. 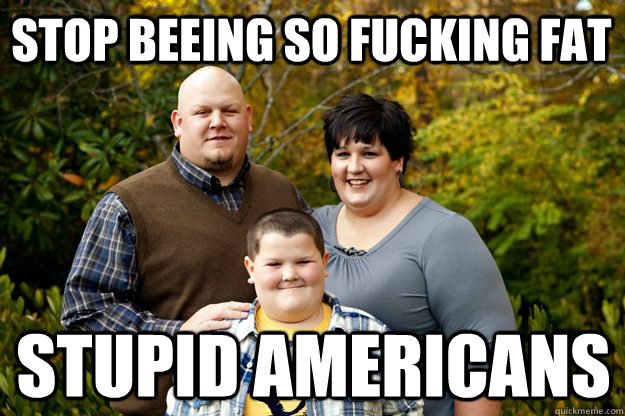 And numbing your brain with America's shite media won't help.  No asshole, you don't have a metabolic problem, unless you are the one in a thousand who inherits one; you gave yourself diabetes.  No, don't get offended if you have a bit of a pot, some wobble in your tuchus, because even I am not perfect...  I am talking about the half of North America who look like the people in this picture, or close to it.  The next picture shows what people looked like when I was an infant, in Canada's now fattest province.

I do feel bad for the family in the first picture, but if the parents are shamed and change their weights, they might just save the boy's life, and lengthen their own.  Shame is good!  You should feel shame for things that are your fault, and you can change.  The kid: little shame for eating what his parents give him.  The parents: criminal shame.  Someone born with a congenital condition: none.  That kid's parents: none, nearly always.  This meme of 'accepting your weight' is bullshit.  It kills people, and it deadens them.

Oh yeah...  haven't you heard that there is more to HFCS than diabetes?  High-fructose corn syrup: it makes you stupid, before it makes you foul, and then it makes you dead.

But we can solve everything by putting in a couple of bike paths and play areas, no?  No.  I know that train station.  It's nowhere.  Tract housing on the edge of a bedroom town on the edge of Toronto, itself inaccessible outside of a car anywhere further than five minutes from its mere twin subway lines (Sheppard and the Scarberia RT do not count).  Nobody uses bike paths that do not take them to work or to school.  That is a plain fact.  Sure, a few people will toddle around on them on weekends, and a few teenagers will get impregnated and stoned in the bushes, but it is not going to make any dent on bellies or traffic congestion.  If you don't believe me, or the studies you can find yourself, go sit on a suburban bike path and count the traffic.  Take a good book.

So let's see:
- HFCS makes you stupid
- and fat
- is addictive
- so you'll vote like an idiot
- buy a house with a huge yard
- you are now too lazy to use or maintain
- and too lazy to get anywhere out of a car
- so you have a loan for the car
- and a mortgage for your house
- so you'll support phantom tax-breaks in hope you don't go under
- that help another class altogether, who were doing fine already
- since they've moved half the work offshore
- and rigged the game in many more ways
- and your subconscious suspects all this
- so you need to take psychoactive drugs, legal or not
- which are made by the same corporations who make HFCS
- sold you a car
- the house
- your insurance policies
- and your investment portfolio, if you have any money left for it
- make more money keeping America at war that at peace
- lose none if your kid's killed abroad
- or from petrochemical pollution
- and are owned by the people who'll benefit from you being a sucker.