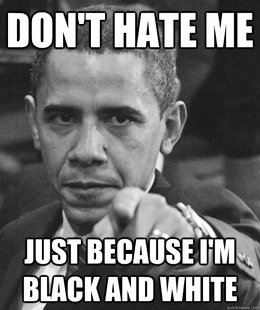 I'm not the first person to be left speechless by the 'one drop rule'.  It's fallacious in obvious ways, but put that aside for a moment and shouldn't it apply to any amount of Chinese?  Of Samoan?  Of 'White'?  (Full disclosure: my kid has a Japanese mother, and I freckle in the shade).  At least the Japanese say 'hafu' for a mixture of Japanese and anything else.  Since my kid is as fully Japanese as he is Canadian, 'half' is insensitive in its own way, but denigrates both equally...

I'm going to break the TV the next time another idiot says, 'Barack Obama is America's first black president'.  Not to diminish that he's not all 'pale-face', but race is a social determination, and even by such an arbitrary determination he is no more 'black' than he is 'white'.   The very fact that people obsess on his lower-status* 'race' proves that race is a social determination, doesn't it?  But I do not buy that we may not refer to race at all as some taboo.  I prefer that humans appear in different shades and minor morphological eccentricities.  I just don't draw assumptions about their interior lives and characters from it.

Let's tease out the tenuousness of Obama's blackness.  He had one genetic parent who might be refereed to as 'black', who did not raise him, and one parent who wouldn't be referred to as 'black'.  He was raised by his 'white' grandmother.  Is he 'half'?  We all are half, or something close, of each of our parents, but was his father 'black'?  Not 'black' American for certain.  (Until too recently many in the British Empire would refer to South Asians as 'black': 'black' has a usage that only means 'other', or 'despised').  America's 'black' population was stolen from West Africa some time ago, and after more than a century and a half have an average 80% West African DNA, but that's going to vary a lot from person to person.  His father did not come from a family with that experience: an American experience of any kind.  His father was from Kenya, which is to say entirely the wrong side of Africa, in the wrong era, with the wrong experiences to be 'black' in America.  Did you know that there is ten times the human genetic diversity in sub-Saharan Africa (once called 'Black Africa') than there is in all other human populations combined?  Two dudes on the opposite sides of a river in central Africa differ far more genetically than me and my Japanese brother-in-law, and you could not tell the former two apart.  Skin colour matters how much?

You see, there is only one objection left to the previous paragraph's shading of the meaning of 'black' or of 'African', whether worded delicately or as plainly as this: 'I know a black when I see one!'  As well as odious, defining the speaker and not the subject, wouldn't that be more proof that 'race' is socially determined?

But that both Obama father and son would have been snubbed by idiots for their appearance in America, they are not 'black': except that may be just what 'black' means...  Obama is as 'black', or 'white', as he takes ownership of, because it's his experience and his face in the mirror.  Our opinions don't matter, and pundits' even less.  Here's a simple rule that society needs to enforce: if you can't speak about 'race' with intelligence, shut up!

*Not my opinion, mind.  I don't think I need to justify saying that 'black' is considered lower-status in the US, and socioeconomically is effectively so.
Posted by Ἀντισθένης at 23:44