This story's too good not to share, but I can't share too much or it could be Googled, and get a few people into trouble, several of whom have penetrated themselves into trouble enough.  Let's use rhetorical questions. 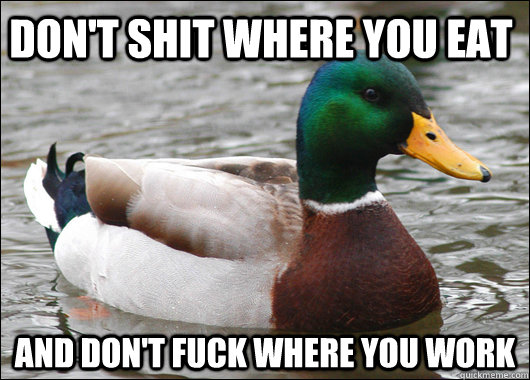 If you were in a supervisory position, wouldn't you try not to fuck the staff?  If you did, wouldn't you be discrete enough not to be seen together both at Gaijin-bars, and in the area you both work and live?  If you were both married, wouldn't you have more reason?  Wouldn't you both leave the workplace once caught, rather than only one of you?  Shouldn't the more senior person be fired first, rather than the junior?  Wouldn't the chances of the company getting sued by the junior for 'harassment' be an issue abroad?  Well, 'this is Japan.'  When cheating on your wife, wouldn't you 'suit up' or at least pull-out, so that your decades younger, ovulating and fertile fling, didn't beget?  If your wife attacked you with a kitchen implement, how would you hide the scar?  Although she hit you elsewhere, wouldn't you wonder she was after doing a Lorena Bobbitt?

Never underestimate human stupidity.  Especially your own.  I don't, which is why I do not cheat.  Morals and ethics are great, but what keeps me honest is knowledge of my own weaknesses: never start down a slippery slope.

None of the names and locations have hit the Internet yet (I have checked), though the entire school community knows, so I should expect it soon will.  The same school has some other large organizational and legal problems that will hit the fan all on their own.

Who am I in this?  I may have/not worked there.  I may/not have (a) friend/s who did/does.  I may/not be hearing all of this first/second/third hand.  I may have/not heard this from foreign/Japanese educational/office staff.  I am one of hundreds of teachers in 'international schools' in Kanto.  I do have several sources, so am certain this is a true story.
Posted by Ἀντισθένης at 16:45