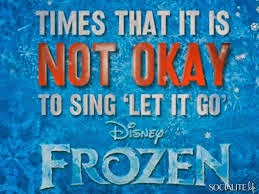 Would be any time you shouldn't sing a 'torch song': you're 'straight', not headlining on Broadway, or have no sense of irony - Japanese.

I got this idea from 'Relentless Writings' dog post.

We're meant to be mature enough to take being second bested, but it doesn't mean we don't feel it.  My son, now four, since birth has made it perfectly clear I was second best to mother, which I can understand.  I didn't carry him, don't have tits, and I'm hairier and smellier.  When he makes me angry I make him deal with his mistake and am not softened up by him until he does.  He's got the mother-con of most Japanese and hybrid boys I've known, from nature or nurture.  I'll have a Japanese, or at least Asian, daughter in-law (or son in-law).

The girl, a year and a half old, has played me far better from birth.  As soon as her eyes could focus she looked into mine and smiled, and owned me.  A more recent example, I was away hiking two nights and the kids and wife were staying at mother in-law's.  I went to meet them, walking with the wife from the station to MIL's house.  We met MIL and the kids on MIL's street.  The girl looked at me as if she suddenly remembered something, smiled, ran past my wife and into my arms.  Then when we got inside I tried to put her down to take off my shoes but she screamed and clutched at me, so I had to improvise another way to get out of them.

Ain't love grand?  Sure, until she remembered her mother has a chest.  After she was done with them I went to pick her up again and she screamed at me and struggled in my arms until I put her back with her mother.
Posted by Ἀντισθένης at 10:02