A wine store near Tokyo with all of its bottles on end,* on open racks with the doors wide open to outside,** half of them against the glass.***  Hmm...  Unless your turnover of every bottle is under a week...  Was interested in the selection, but turned on my heel and left.  Took this photo from outside. 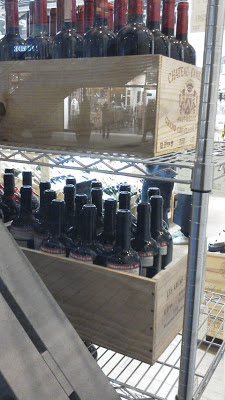 Now I have seen poor wine storage elsewhere, but I see no end in Japan.  There are otaku of foreign tipples who do get it right, but they are an exception, and expensive.   I know cellaring is not in the culture, but shit: Google it.  No, fuck you!  If you're selling something, try not to do all of the things to ruin a product in ways the buyer won't know until they uncork it... if they even know enough even then.

Reminds me of my brother taking me to Delirium and noting the beer would be better if it weren't so cold.  "Yes, but cellar temperature beer is a non-seller with the salaryman."

*Corks will dry out, and become permeable to pathogens which will ruin the wine.
**Wine keeps and ages best at a consistent and cool temperature and high humidity (think 'cellar'): not Tokyo's dry winters down to zero, and humid summers up near forty.
***UV bad.
Posted by Ἀντισθένης at 16:21