I was so excited to see this on my friend's street the other day.  More excited his (married) friend knew what it was.  Why didn't I know girls like that a couple decades back?* 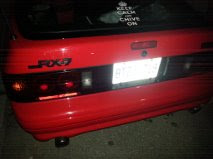 This is a cool thing that'll make sense to anyone with a passing knowledge of Japanese shaken/road-tax byzantine rules: the Wankel engine was to get higher power while paying only for a lower displacement.  Do you think engineers were allowed to use something as mental, and self-destructive, as a Wankel engine for a better reason?

*Earlier in the evening I not only discovered she was another Montréal Anglo refugee, and was bored to death in Toronto, but when I asked the room what the typical Toronto date question was that showed how boring and materialistic people are, she knew: "What do you do?"