I have never had a mountain bike in my stable, and want one when I go back to Canada.  Three reasons: I had great fun renting one, the learning curve was not hard after urban fixed-gear riding; I want to be able to ride around Toronto without always fearing fuck-witted drivers; and I do not want snow-packed trails to stop me a third of the year.

Going to be hard to justify a third new bike!  You see, when I leave Japan I am going to try to sell the fixed-gear commuter, and leave the road bike for riding on family visits*, meaning I need to replace both of those in Canada (not sure of the road bike, I so distrust Ontario drivers and even more in the 'burbs and rural).  So the third (or second) bike is the off-road bike.  I'm a tall guy, and I am used to big wheels, so a 29er is it.  Also I would not go full-suspension, eschew hydraulics, prefer steel, and even prefer full rigid.  Some of that is luddite, but some of it makes sense for a winter/summer do it all machine: a fat bike.  What's that?!  You put enormous tires on a 26er, making the diameter the same as a 29er, having about half the suspension of an FS bike, but far fewer moving parts, and a tonne of float.  Goes over all but light snow, which we don't get near Toronto, and rolls over any damned trail.

In the past two years the number of fat-bike frames and complete bikes have exploded, and I will not list them all, but the cheapest/easiest options are the three series of complete bikes made by QPB: 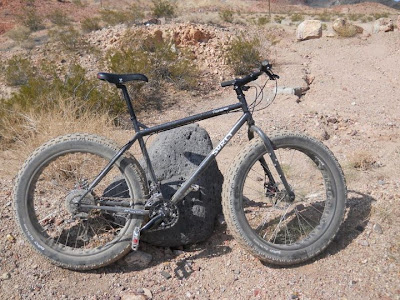 *Because the humidity's too evil to try to run for training around Tokyo in the summer.
Posted by Ἀντισθένης at 20:22