Are not played by men.  What's a 'hair-gel sport'?  Soccer and gymnastics, for a start. 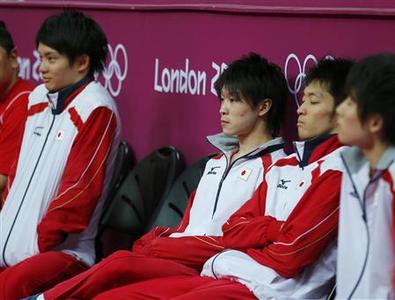 The thought was inspired by Kamo's post reminding me that neither I, nor most of my countrymen (Canadians) or Americans can ever care about soccer.  It's likely in poor taste to quote one's own comments from another blog, but:


Divers... This is why football/soccer has not, and will never, get on in the US and Canada. We cannot take the sport seriously, or the fans (i.e. Europeans, and who's joined you? E. Asians). Enforcers we get, and we have them in hockey to the extent we call them the same: 'enforcers'. Goons to a man, but players like Gretzky only kept skating because the enforcers on his team would tear you a new one if you made a bad hit on him.

I think all team sports are daft if played by people over twelve, nevertheless I'd put money on any hockey enforcer over a soccer/football one...

Honestly, I did try to watch soccer/football once. My father is after all from your foggy North. But I saw some continental get brushed on the shoulder, grab his jaw and start limping. If I'd watch male sports it'd need to be played by men.

I don't even like hockey, or (American or Canadian) football, but at least they are 'helmet sports'.  Accuse me of vestiges of homophobia if you'd like, but men do not have hairstyles, they have hair cuts.  I do not care if a man sucks cock, but for god's sake don't be prissy about your hair.  A helmet sport keeps a man honest.

It's too early to know if my boy likes girls or other boys, and I will accept either orientation, but he's playing no 'hair gel sport'!
Posted by Ἀντισθένης at 16:20