She's not feeling it, Japan. He is.

You've all heard this story: 'Western' hetero-couple comes to Japan, woman bails within the year and dude stays.  New couple at my 'international school': they've only been here a month, but their story's already written.  Friday, he enjoyed himself a bit too much not to keep his eyes from straying, while his GF wasn't having any fun at all.  I have a picture, with them in the middle, I'd love to post: his face, enthusiasm; hers, rue.  Western women, you can keep your man in Japan, but a sense of humour goes a long way.  Hell, I have dated a western woman in Japan, and work with several I'd think to chase were I single: they all have a sense of humour. 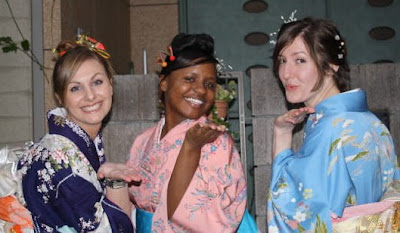 None of them felt threatened by local women, or stay single any longer than they care to.  It's not us ('Western' men in Japan), it's you (the humourless).  Doesn't help this one's a vegetarian.  Shit on me all you want, and I know some male vegetarians who can take a joke, but not women: a sense of humour never goes with both femininity and vegetarianism, and certainly not also with Conservative Judaism (what was I thinking?).

Japan is far from perfect, and neither are the women, but it sure looks that way to a young man dealing with your snide when his first impression of Japan on a night out is this.

I well know there's a lot of bait and switch here: I'm married.  However, if the guy is worth keeping (because nobody else will fuck you with that attitude), you won't do it by sniping at the local women who your man sees in beer goggles coloured as above.  If you wanted life to be 'fair', why did you come here?