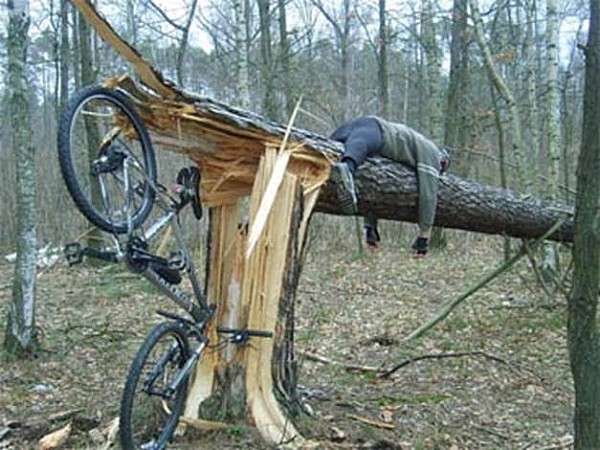 If you ride, you crash.  If you ride hard, you crash hard; fast, fast; stupid, stupid.  You decide which describes what happened to me last week.

Tokyo's a safer, but more stressful, city to ride than Toronto.  Roads are busier and narrower, corners blind, people pass closer and the 'yankee'-piloted scooters are an abomination, but these are perceived dangers.  Japanese laws punish the heavier vehicle in any collision, right or wrong*, making the Japanese driver more attentive than the Canadian, though arguably more likely to 'hit and run'.  I wonder, but it's possible that accidents happen more often than in Toronto; however, since traffic speeds are much slower the consequences are much less: I'd far rather be hit four times at 15 km/h than once at 60. 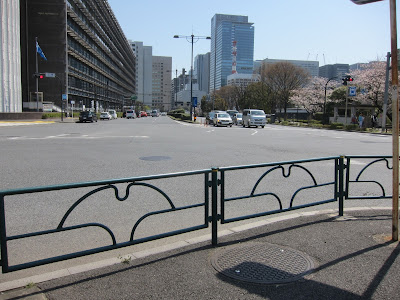 If you thought the unsightly railings along Japanese sidewalks were to protect pedestrians from drivers, you do not know how fucking stupid Japanese walkers and cyclists** are.  The dick thought I needed reminding by making a right-angled turn from the sidewalk onto the street without turning his head to look, through a gap in the railing.  Have you ever once seen a Japanese person turn their head?  Peripheral vision?  I'll have to test the J-wife.  Through evasion and over-correction I ended up Superman-ing over the handlebars.

It's fine that Aikido taught me to roll; however, when inertia is headed to a railing, options decrease.  I managed to spread out my mass in an improvised belly-flop, keeping my head off the street.***  Apart from bar-tape the bike is fine: more justification for fixed-gear.  I am not badly off: scrapes on knees and forearms, a hyper-extended ring-finger right and mashed thumb-heel left.  Note: ride wearing gloves, and be glad for cold weather gear in a crash.

As I was half of the way to work, I had to dust myself off and continue the other half of the ride through central Tokyo with both hands hurting each time I used the brakes: the left hand on the more important brake hurting more.  Much fun!  Bike remains locked at work until the day I can use brakes properly.  The toddler and infant I cannot abandon.  When they don't blithely pull on one of the damaged fingers I am reminded of the accident by pain when I pick them up.  As ever, thankful against what could have been worse.

*Japanese law and psychology both cannot manage 'spirit of the law'.
**Cyclists on the sidewalk, bien sûr
***Still having never hit my head, determined to keep wearing a helmet against the day I do.
Posted by Ἀντισθένης at 10:01