The Bank of Canada's recently announced that Canadian real estate is 10-30% over valued.  National banks do not tend to exaggerate these things: the contrary.  I can buy a middle-class house as close to downtown Tokyo as I live in Toronto for a third the price.*  My brother, who's been on Wall Street, and has an important enough position that I can neither name him nor the position, said over Christmas dinner:


I don't see thirty-percent happening; however, I did just unload my other property.  You can read between the lines.

And yet... and yet... banker friend-of-a-friend today insisted that we're not in a bubble, because 'if you compare Toronto to other international cities...'


Fuck me.  I am a bad guest.  I'm afraid I shouted the refrain nobody native to Toronto will hear:


For fuck's sake, Toronto is NOT an INTERNATIONAL CITY.

Looking at its size and economy, it's the lesser Great Lake city to Chicago by half.  It's Houston.  Kita-Kyushu/Fukuoka.  Birmingham.  And like all of these places, not integral to it's home economy.  The Canadian economy has long lost its sovereignty: Toronto's is regional. 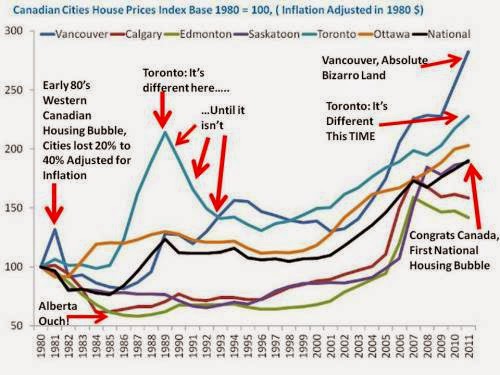 Toronto in '88...  I went off to McGill University when the economy was humming, aiming for a BA that wasn't yet the entirely idiotic idea it turned out to be not half a decade later when I had it in hand.  Oh yeah, my father was soon out of work too, as happens with a trend like Toronto's '88-'96.


What's more, as I pointed out to the banker, the only thing that fueled the (inflation adjusted) growth in house prices for the Boomers, so that any but the most brain-dead made out like bandits on real estate, ain't going to happen again unless we send our children to the salt mines: a second income from women joining the workforce.  But I'm just a fucking teacher and he's the banker.  God help us all.

*Though Japan's having it's own economic issues, Tokyo largely isn't: the hinterland's gangrenous, but the core won't die for a while.
Posted by Ἀντισθένης at 13:12