Travels as a misanthrope

This is another rescued post from something I left on a hard-drive. 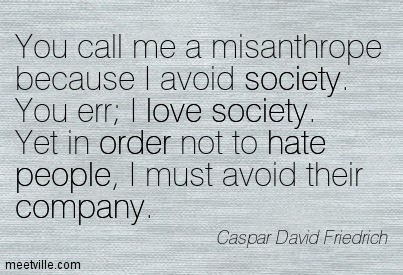 I have a list of planned journeys taller than my piles of maps and guidebooks.  I plan to sail the length of and Georgian Bay; cycle Gaspé, the Cabot Trail and ; paddle any number of Shield and Tundra rivers; and hike the length of the Japanese Alps.  Very little of this happens.

I chose teaching in part for the time it gives me, but the shame of it is none of my friends have the time or inclination to join me.  I love my fiancée despite the fact she won’t spend more than two nights in a tent.  My secret shame is that I am too needy for company to go solo.

Oh, I have done solo trips.  I have paddled on Georgian Bay, in Algonquin, cycle-toured , and hiked in and the .  To be modest, these have not been much longer than my fiancée will spend in a tent.  Then again, even short solo trips tend to be dramatic.  It’s more exciting alone to be in high waves, chased by a dog, or fall into various dangers.  Stupidity is a better story after the fact.

Most people go squirrelly alone.  History abounds with ‘Mad Trappers’ and other desperate souls.  There is much to be gained by solitude, but once you’ve done it, you realise how daunting it is.  Everyone ought to make a solo trip, but they should do it ignorant.  It’s too late for my ignorance, so this summer I did not paddle a week on Georgian Bay, cycle the Gaspé, and last year was no better.

A son-of-a-bitch can put out a fire, on two occasions, when the person responsible is frozen in panic.  A son-of-a-bitch will get camp set-up and warm food into people in a thunderstorm.  A son-of-a-bitch keeps an eye out for other paddlers in two meter waves, and doesn't back down when anyone wants to make the same mistake the next day.  A son-of-a-bitch has forced his delirious friend into dry clothes and a sleeping bag when showing signs of hypothermia.  However, my friends are still friends, but oddly busy on long weekends.

I could work on my expedition inter-personal skills, but I don’t know how to separate my gruffness from my diligence, and I am too smug about my friends' continued survival, due to nothing on their part and entirely on mine.  I will ask readers one thing: please remember what a son-of-a-bitch has done for you.
Posted by Ἀντισθένης at 05:53