Some virago* thinks she is in a position to judge Philip Roth!  She's no match on him: few are.  Most people are humble enough to know, whether or not Roth is to their taste, they are wildly out-classed.  People will be reading Roth a hundred years, or more, into the future.  Who the hell is Carmen Callil? 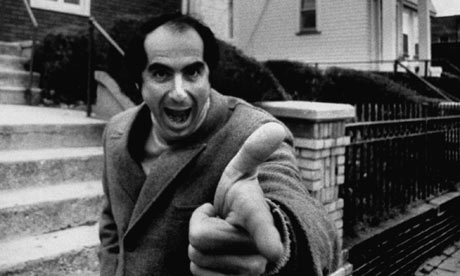 It reminds me of an interview I read (in Granta) of the interminable Mavis Gallant running down more talented Mordechai Richler.


I remember one of the people around in that winter of 1950-51, and who I moved to the Right Bank to get away from, was Mordecai Richler. He was a bit of a brat. He was much younger. I’d met him in Montreal.

That winter everyone in the world was around Paris that I knew, practically. And I realized he didn’t like it at all. For one thing, he couldn’t speak any French. Though he came from Montreal, he couldn’t say, “Pass the salt.” He couldn’t say anything.

One day Mordecai came drifting over and he sat down and he grabbed the book out of my hand that I was reading. It was The House in Paris, Elizabeth Bowen’s great novel.

And he read some in a mocking voice. A mocking English voice that he didn’t do very well. And he said, “You know, if you go on reading this crap you’re never going to get anywhere.” So I just took the book back.

Mavis and Carmin, what you wanted to say is, "kyke!"

There are some few women writers I have enjoyed.  Lionel Shriver and Laura Kipness I did.  Perhaps I enjoyed both more than most women writers becuase they have a pitiless sense of humour.  There are few reads more funny than the list in the centre of "Against Love"; and "We have to Talk about Kevin" is quite funny in even the more vicious parts.  A sense of humour is not a characteristic of many women writers, especially the priestesses of Can-Lit.

Now I have no sisters, two brothers, come from an unsentimental family, and do not like to talk about my, or read about someone else's feelings and ruminations, so I am outside the market for the sort of book stereotypical women's writers make.  These books are not funny.  Most of all, their work is excrutiating, because they take themselves so damnably serious.  Well I am very sorry, but that's not attractive at all.  A woman might get away with being very pretty; even better, she should be quick-witted and funny as hell.

*'Virago' is the apt name of her 'feminist publishing house'.
Posted by Ἀντισθένης at 09:13