There are any number of web pages about the 'right way' to ride, but all those I have seen make the mistake of assuming you ride in their city, the same way they ride.  I won't.  I also won't tell you to wear a helmet, or talk further about 'vehicular cycling', except to call its advocates dogmatic.  Any discussion on either topic will be deleted from the comments, because both tend towards 'Godwin's Law'.

Don't get hurt, hurt others, damage property or get caught for flouting the law; on a decreasing scale your responsibilities are to people's lives, person, and property.  The letter of the law comes long after any of these, as the letter of the law is not written to prioritize these appropriately, in N.America.  It is written and enforced far better in Holland, Denmark and Japan, and there are far more adult cyclists.  'Chicken'?  'Egg'?

Never mind the drivers who talk about cyclists riding in a way that 'scares' them.  Excuse me?  You in your steel cocoon are scared of me on my bicycle?  Give your head a shake.  Even if I were self-destructive enough to throw myself at your bodywork to bloody it out of spite, you are in no danger.  Get over yourself.  Be aware of the traffic rules and location of the agents of the state, but getting a fine for a badly written law is only the cost of doing business, and far less than the cost of gas, insurance, parking or car payments in a month.

Drivers are often blind, lazy, stupid or some combination.  Make them see you.  Yellow triangles, very bright lights and positioning are things I use night and day.  Getting seen is half the battle.  If the excuse is you weren't seen, but your bike looks like a disco, you have a better case with the police and the court.

I ride like a dick in Toronto, because it is the only way not to get killed, and to get anywhere fast enough not to give up bicycling.  Your average Toronto driver will say I am 'one of those' cyclists, but the truth is they hate everybody out of a car, and would have us all become more obese 'cagers'; in fact they just hate everybody.  I dominate the lane, curse and gesticulate, and on the rare occasion a driver does something thoughtful I make a wave, smile or bow - just so I don't faint from surprise.  Being this aggressive, or defensive, I make sure I have a place to bail to in case of driver idiocy or rage.

I do not ride like that in Tokyo, because drivers in Tokyo aren't dicks.  Your experience may vary. Two words for those of you who think that we should try to explain how vulnerable we are, and befriend drivers: 'Uncle Tom'.

Know the crime rate
There are American locations you should not ride in, because you might get shot.  There are N.American and Canadian locations not to ride in, because you may get forced off the road.  Find out.  That's what the Internet is for.  You want to avoid trouble, not rely on the police, for God's sake.  It will also help you choose if your odds are better on a busy street at night, or an isolated bike path.  If you are a girl, try not to look like one. 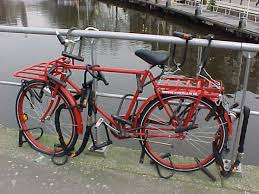 A more important crime rate is the collision rate, though few N.Americans consider it a crime: and no cops.  You are more likely to be struck than assaulted.  You will be verbally assaulted often, but the best way to put an end to this is ride away, or challenge the fatso to get out of his car.  They rarely will, and if they have you can ride away faster than they can waddle, or get back in their car and chase you.  If your city has a terrible rate, let that inform how little to trust drivers.  I trust none.  Yes, taxis and BMW drivers are fuckers.  Truck and bus drivers are more decent than other drivers, but have good reason not to be able to see you.  Mini-van drivers drive more blind, with less reason.  They don't see your kind in the 'burbs.

As for theft, most of N.America is a joke: your bike is gone, and nobody cares.  There are only a few good ways to avoid this.  If you cannot bring a full-sized bike inside your place of work and lock it to something (I could), I would suggest you get a folder and lock it to something where you can keep an eye on it.  As for running errands, I will only use bike-share in N.America, or a complete beater, or use a good bike nervously.  How is that?  Lock it in a high-visibility location with redundant locks, including through a saddle worth anything.  Do not leave it for more than an hour.  Do not do this at night: it is easier to get stolen in the dark, or the wheels stomped by some jilted drunk.

Your route
I neither advocate for nor against bike lanes and pathways.  Tokyo has far fewer than Toronto's few, yet is a far safer city to ride.  But I would still like Tokyo to have more than just those along its river embankments.  Pathways have the advantage of few traffic lights, no cars, less pollution and noise, but may be nowhere near your route.  Lanes have not been proven to be any safer than a regular street, and are no solution for not protecting cyclists and pedestrians in the courts.  Witness take-out parking. Use online mapping to choose a route that will get you to work as safely and efficiently as possible: aim for fewer cars, lights, cops, streetcar tracks and pot holes.

What to wear and ride

That's going to depend on several things: distance, speed, climate and money.  As for money, spend some if the ride is long, but don't spend like a poseur.  Start with a good saddle and tires.  There is both good reason people use drop bars for long distances, and city bikes for short.  Research friends and online.  If you find a shop that tells you the same as online, buy there.  The rest will up-sell.  Wear what matches the bike: riding shorts for road bikes, and regular wear for city bikes, suited for the distance that you ride.  Unless you live in LA, you need fenders: rain happens, and so does shit.  Goose shit in Toronto.

Dealing with the ignorant
Your work should provide a place to shower, not lock it up as a storage room.  Fat suburban administrators don't ride bikes in Ontario, I guess.  No, I could not convince my principal to unlock it.  Long story, big blow-up (hers), still pissed.  'You can't fight city hall', so if persuasion doesn't work, find another way to get clean if your ride is long.  Amazing what you can do with two towels and a bathroom sink.  Short hair everywhere expedites this.

Noli nothis permittere te terere
The cagers make this much harder than it has to be, but look at it this way: "Living well is the best revenge." They act miserable, and they are.  Sloth, obesity, fear and hate does that to a person.  Every day you ride a bike makes you less like them.
Posted by Ἀντισθένης at 21:21