Where Pedestrians Go To Die.

Found this in "Good": among its collection of 'progressive' infographics. 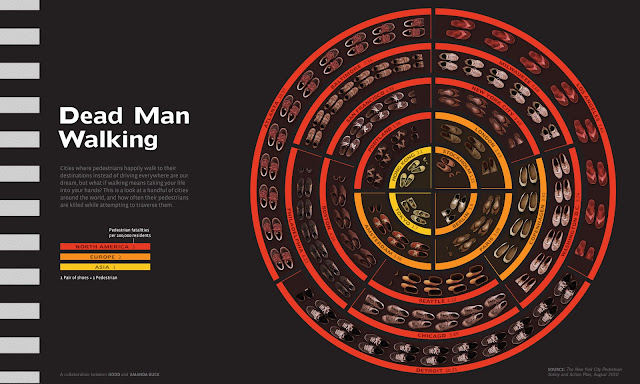 Whatever your politics, it's stupid so many people have to die going for a walk, or getting to work, especially since so many of them are children.  Maybe baby-eating Bush-Cheney Republicans prefer that, come to think of it.  Toronto's rates are right up there with great cities on this graphic like Atlanta, Detroit and all the crap cities in the two outer rings.  All of the cities you might travel to visit, unlike Toronto et alia, have a death rate half, or less.  I am almost three times as likely to die by car in Toronto as Tokyo, despite the far worse infrastructure and crowding in Tokyo.  All it would take is a little enforcement to change the tide.
Minimally related links:
"A Physicist Solves the City"

"Paris may say 'non!' to SUVs" (Imagine the violence in N. America!)
"...dragged a 4-year-old boy in a booze fuelled, speeding hit-and-run... two-year jail sentence and banned from driving for five..."  Sociopath better treated with life-imprisonment: not punishment, quarantine.
Posted by Ἀντισθένης at 09:55