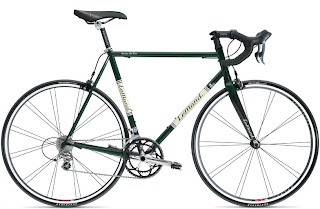 I have quite a nice road bike, but I am not entirely happy with it.  I bought it five years ago when I knew little about bikes, so I am pretty happy that it has been as useful as it has, since joining every sport requires a financial outlay for equipment, which inevitably will not suit your interests as they develop depth.  This is true for the three of my bikes: the 'road bike', the 'all-weather fixed gear' and the 'retro-cross'.  I need to replace this bike with one of the three choices at the end of this post.

The picture of the 2006 Lemond Croix de Fer is stock, and my own has some changes: not least is the triple-ring I ordered it with.  In retrospect, this kind of bike should have a double, but if you need a triple-ring (touring/randonneuring) you should look for slacker geometry.  It is made of pretty and smooth-riding 'OX Platinum' steel.  Whatever, it's comfortable and not very heavy.  It has a 105 groupset, which is ideal value for money.

It came with 27mm tires which punctured and tore in short order.  I replaced them with 23mm puncture-resistant tires, which were not comfortable to ride, and replaced them again with 28mm puncture-resistant tires, which are as large as I have clearance for.  I got rid of the so-called 'cork' wrap, and replaced it with double wrapped and shellacked cotton tape, which I prefer.  I switched the 52 for a 48 ring, but still rarely use the big ring.

The saddle was god-awful, and I replaced that with a preposterously expensive titanium-railed Brooks Swallow (at half-price, but the price remains a secret to my wife).  The pedals have been replaced for the new Shimano spd a520s, but a double sided version would be preferable for getting in to them in traffic.  I use them with a light mtn. bike shoe.  This is just as comfortable and efficient as the road shoes and pedals I had used, but far more comfortable for walking off the bike.

I'm not very happy with the tire-clearance, the carbon fork anxieties and the few spokes on the wheelset.  Unsuitably for the bike, I fussed around with racks, and fenders, and learned to eschew racks for frame, seat and handlebar bags (also saving the weight of the racks).  Fenders are limited to clip-ons because there isn't the clearance for anything proper.  I rarely use them as I do not like the toe-overlap and the noise they make.  I decided the wheelset is not worth replacing for the cost, and they have held up fine for my 175 lbs.


Randonneuring Bike
I did not know that I needed a randonneuring bike: not as tight as this road bike, and not as heavy as a touring bike.  It's a shame that there are so few steel randonneuring bikes on the market, because that's what most moderate riders need.  There are plenty of nice hand-built ones, but that's truly subject to 'the law of diminishing returns'.  The three that I have found on a reasonable budget (about $1500) all come with a Tiagra groupset... which is not as good as the 105 I have, but in truth good enough.  Wheels matter more.  The saddles and pedals are pretty irrelevant, except that the Clubman comes with a Brooks, though I have three of these already. 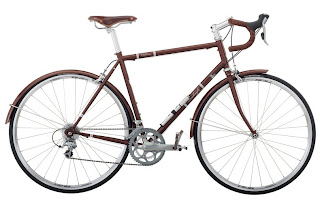 The Raleigh Clubman doesn't have the clearance I want, which is 35mm with fenders, never mind that usage will be far more rare than 28mm with tires.  Not fond of the brifters if I have a front bag.  The geometry is fine.  Not fond of the compact-double for the gearing I want.

The Masi Speciale Randonneur gets almost everything right, though I'd move those shifters to the bar-ends.  I think the chainstays are longer than they need to be, since I plan to load the front a bit more than the back.  The triple is good, but I would want an easier cassette.  I like long-reach calipers, but I would wonder about the clearance.  Getting better.

The Salsa Casseroll Triple is closest to perfect.  The geometry and gearing is ideal.  I like the front rack.  Though the brakes are not my first choice, the clearance is huge.  I do not know much about wheels, but I bet Salsa has the best of the three (it's the more expensive bike).  The brifters I could change if I decide it matters, or leave them as they are.

I'd like to have the Salsa and keep the Lemond, but four on-road bikes is a bit excessive... since I want to get a 29r too!

All of these are steel.  None have disk brakes.  Disks and aluminum are ugly; a pain in the ass and a harsh ride, respectively.  Carbon frames are for tossers who buy BMWs, and don’t know how to ride or drive.
The ones in bold-italics are the best balance of zippy; yet take big enough tires and fenders for light-touring. The Masi Speciale CX is really the compromise of all possible worlds, and costs only $1200… or maybe the Cross Check is, at a similar price.
On the other hand, if you want an off/on road bike, which has unbreakable bar-con shifters, like I do, go to the coloured cells.  Might be less zippy, but will be the only bike you will ever need.  Value for money, I like the Surlys and the Brodie Elan (all about $1.4K), but I lust after the Dahon Tournado ($2.3K).
Three of these have Brooks saddles, worth $150 to $200, noted.
Posted by Ἀντισθένης at 15:27