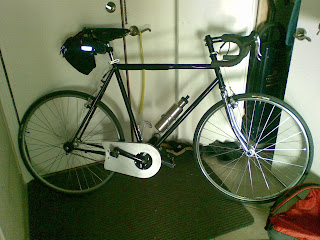 It's neither a proper monster-cross nor gravel-grinder, but I like it.  The Salsa Fargo would be better at both.  I've lost the silly chainguard, but that's a legacy of the bike's original purpose: a fixed-free retro-style city bike.  In that guise it also had fenders, and those I kept.  It's in Canada, and I am in Tokyo.

To back up a little, my wife bought me this bike, with misgivings.  I'd bought her an engagement ring, little remembering that in Japan all gifts are requited with something of about half that value, so I suggest you marry a Japanese woman.  The guys at Urbane Cyclist in Toronto, where the build was done, have probably started to stalk every Asian woman they see, in hopes she is Japanese and will marry them.  They certainly thought she is cool; and she is.  She would rather have bought me a nice watch, but I pointed out to her another bike is something I would use; I use my cell as a watch, and it's more accurate.

This is something of a knock-off of an ANT bike and a Pashley Guv'nor.  I had it assembled as I wanted at Urbane Cyclist, and though I don't fault them, it's not an ideal way to get a bike made: complete bikes are so much cheaper.  The frame has a very relaxed geometry, and is portly.  It eats up a lot of vibration, and the mass makes it quite a juggernaut.  It's slow, but a shockingly comfortable ride for 100km of gravel.  Despite the picture, it has always had fenders.  I wanted to try Nitto Randonneur Bars, and fixed gear, and have a chainguard for city riding.  The chainguard was the most useless.  I don't ride in casual clothes: I can't make myself go slowly enough not to sweat, I don't keep my bike clean enough, and I never felt confident enough in bike-theft-ridden Toronto to leave the bike out that I got for my wedding.  I'll use bike share for errands when it becomes practicable.

The bike has had many permutations, so has been a fine 'entry drug' to singlespeed and fixed gear.  It's been fixed/free, then free/free: too heavy for the former, and I decided that singlespeed has few of the advantages of fixed, and fewer of freewheels and cassettes.  Besides this bike I have a road bike, and a fixed gear, so I had to think of a good use for this bike.  I decided that it was my bad roads and foul weather bike, including Toronto's variable winters.  I run 35mm cyclocross tires, with room to spare.  I tried studded winter tires: noisy and sloooooooooow.  I was able to fit a six-speed 40-80" freewheel on the wheel I had, and made it a 1x6 and have not felt lacking.  I left the Surly Dingle Cog on the other side, in case I want to break the chain and ride fixed for no good reason.

For summer use I run Shimano's versatile touring pedals.  These are no good for fixed riding.  I have had pedal strike.  I have not come up with a perfect winter solution.  There are too many times I have gone down on ice in winter to use clipless on the worst days.  I want to be able to get my foot out faster.  When I go home I'll try studded downhill pedals for winter.
Posted by Ἀντισθένης at 22:42