My personal quarantine of America. 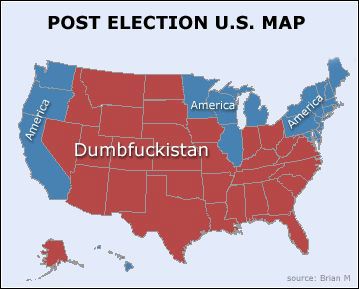 I know that a majority of Americans, who voted, voted for a Democrat president who isn't white.  I know that the Tea-Party insanity is a creation of Fox 'News' and some dubious moneyed interests, and not an organic movement at all.  I know that those fighting against their own class-interests at the expense of their neighbours, live in conservative fear, in fly-over states; even there a number of people are not insane.  I know that America's two centuries of imperial wars have been fought by young men who died for freedom or their fellow man, while someone else profited and kept their own sons out of the line, and 'dusky people' were decimated.

So no, I don't hate most Americans: I rather like most I have met there and abroad.  I do hate America as an abstraction, and I want it out of my mental space.

Someone in my family once accused me of supporting 'Castro's Regime' for planning to go climbing in Cuba.  I never did go, but it made me think about what my tourist dollars support.  Scrupulosity is a real danger because the venality of humanity makes it impossible to live right among them; yet we have to find a course among the shoals.  I have refused to go the U.S. for a decade, like Lars von Trier, though un-notably  I will never go to the U.S. again, because:
- Even if you do not believe they are the desperate resource-wars of a fading empire, Iraq and Afghanistan were entered on false pretences, to massive loss of life, and have achieved no benefits for the population.  Exactly what every honest person predicted.  Exactly what an acquaintance with American history teaches.
- The 'Tea-Party' and other right-wing organs have been 'shouting fire in a crowded theatre' for several years, but haven't the stones to take any responsibility for the Arizona murders.
- It was a struggle to get such a poor health-care bill passed in a nation with the worst first-world health-care outcomes, at the highest cost.
- My country, Canada, has had to give up most of its sovereignty so that the U.S. can secure access to our resources and markets, and we have also lost sovereignty over our political dialogue, drug policy...  Though it sure beats carpet-bombing.
- Even twenty years ago the privilege of transferring through a U.S. airport from and to other countries (Canada/Japan) required lining up for immigration.  After '9/11' you had to retrieve your luggage and check it through again.  Now my family can be scanned or assaulted, or both.  El Al has a better record.
- The country can't deal honestly with race, class and sexuality, much less its history with them.
- Nor can it deal with the violence in its history, in its imagery and its rhetoric.
- You can show a 'hero' murder hundreds to a teenage audience, but you can't give honest sexual advice to the same cohort.

Everyone knew a killing was going to happen in this environment, including the honest Sheriff.  With all the idiot testosterone that led to this it took a 'real man' to run towards the bullets: a gay Hispanic real man.  It doesn't matter that he's gay, or Hispanic, or a man; except that the first two matter to the cowards in the 'Tea-Party'.
Posted by Ἀντισθένης at 14:05