Seen on the train, of course.

Why not just title it: 'Statutory rape! Tit-fuck her!'

Yes, I know that sixteen is not statutory rape in Japan.  Hell, in '95 legal was sixteen in Tokyo, but fourteen in Saitama, so guess where all the paid-date services went...  That's not even the ad I saw in the train.  All I did was Google: 16歳 H-cup。

Besides the fact that everyone involved in the publication should be castrated, or whatever's appropriate for the women, if she isn't a runaway, what the fuck are her parents thinking whoring her out?  I get that teenagers are sexual, and I get that many do have attractive post-pubescent figures, but she's sixteen!  Let her show those to a boyfriend not more than two years older, him wrapped in a condom, but this is the market. 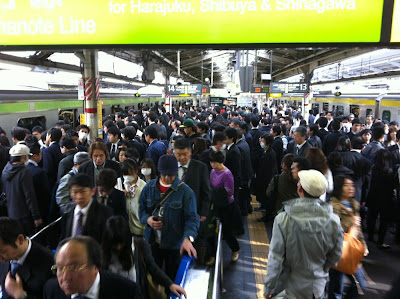 And half of them have daughters.  Ever wondered why Japanese women hate their fathers?  I don't wonder.

Also can't refrain from mentioning that though the girl's got a pair, 'H' doesn't mean the same thing in Japan as abroad.

On a lighter note:


"after a year, the bosoms of bra wearers sag an average of 7mm more than free-range boobs."

Let them go free!  I'd encourage the wife, but besides the fact that I've seen them plenty, most recently stuck in babies' mouths (bastards...), she has a situation where she always looks like she's cold.  Figure it out.  I have to say that I officially regret the path my life has taken: I could have done thorough research on consenting young women, and their breasts - besides the haphazard sampling I once did.

On my first tour of duty in Japan, in my mid-twenties, towards the end of three years I had no more interest in dating the locals, or anything to do with their culture.  I was fed up with the narrow-mindedness of the population, and the physical ugliness of Tokyo.  I was elated at my decision to get the hell out of here.  I'd even had a brief fling with a white girl!*  And then a fashion for halter-tops without any suspension had to happen that summer to make me regret leaving.