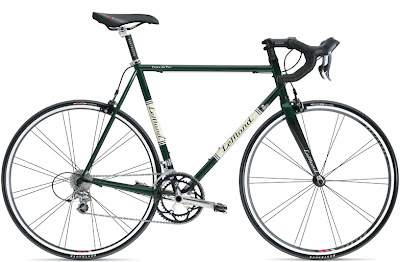 I bought the Lemond Croix de Fer triple, now eight years ago, and I have finally settled on and achieved a sensible gearing for: someone who rides alone, not in pelotons, needs gears for climbing passes, and can spin plenty fast enough to get speed out of a top gearing of 100".

I've now settled on 26/39/46, 12-27: 26-103".  This is how it should have come from the builder, but everyone thinks they are Lance... Wiggins...  The gear inch range is better, and it shifts better, and the distribution is better.  I have a downwind ring, an upwind ring, and an uphill ring, and a good range of sprockets to use in each.  I had to move the derailleur down 6 mm, to match the radii of all three smaller rings, especially the middle which one uses as the benchmark.  I'd dreaded the futzing this would take, but in the end it was the work of just a half hour, once I'd moved it down to leave 1 to 2 mm clearance over the top ring, lined it up parallel to the chain when in the smallest sprocket, and adjusted the shifter-cable tension by eye.

Here are some of the other modifications I have made, and one I did not:
- accessories
- details
- steel fork
- never did get the Sugino OX801D crank to narrow the q-factor by a mere centimeter for $500
Posted by Ἀντισθένης at 15:43