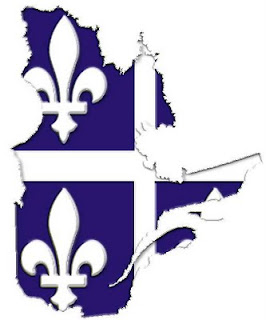 Québec's separatist party, 'Le Parti Québécois', has finally got to what I have been saying in my posts linked in this clause: make separation about keeping Québec a state livable for the 99%.  If only it weren't 'too little too late'.  The PQ is finished, and any hope of getting Anglophone and Allophone, or even tolerant Francophone, votes is finished.  No ethnic massacres happened in modern Québéc, and that is a grand success; however, there was once enough nationalism for many of Montréal's Jews to remove themselves to Toronto - for which you cannot blame anyone after an experience of 1940s Europe...  It would also have been a fine thing if bigoted opinions were not easily heard from the areas where the PQ is strongest.

Besides, for the PQ to transition to post-nationalist, but keep the social-democratic flavour, would be disingenuous or impossible.  It was founded more to sustain a Québécois identity than a Francophone one, and that transition looked disingenuous enough: to gain some immigrant votes.  It also didn't work.

For Québec to retain its Francophone identity no longer looks difficult; for it to retain a semi-socialist one in a Neo-Con N.America does.  My fantasy?  A popular and separatist Québec NDP.
Posted by Ἀντισθένης at 14:57