Hard to get worked up to defend Japan's women, when its women won't. 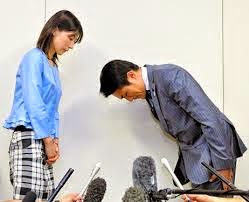 I've barely got the energy for this, when god knows Japan's women don't.  Ayaka Shiomura dared have it, but all she gets is the perfunctory bow of yet another particularly stupid LDP member scapegoated for crimes common to them all.

An LDP tool gave voice aloud to the sexism that defines gender relations in Japan in the Tokyo assembly.  The outburst is now international news. Of 'developed nations', Japan has the worst status of women, yet women have had the vote since the American Occupation gave it to them, and done damn little with it since. They've been crucifying the tool in the media, and his resignation was very visible, but the facts that his words reflect the effective policies of his (ruling) party, Japan's society, and its voters (including its women)... don't hold your breath for these to be addressed.

Besides justice and human rights, if these weren't enough, it's beneath a man's dignity to discriminate. These are no men.  Should I clarify which men I am referring to?  How narrowly or broadly?  No, I don't really feel the need.

This is no country for my children.  I have a daughter, but that doesn't inform my superior values as I had them before she was born, although grew up without sisters.  I have a wife, who is my equal, but before I met her I did not treat girlfriends with contempt.  My father was indeed sexist: I surpassed him, as one does.  As my blog must make abundantly clear, I don't really like most women, and rabidly hate feminized environments; I do not have my head so far up my own ass that antipathy offers me any rationale to speak or do harm.

Japan?  Well, it's a sociological perpetual-motion machine, it is.  There are, however, people who will tell you it changes, except it doesn't, so far as I can tell since my first encounter in '93.  If I am wrong, it changes too slowly for me to notice, and that says rather less about me than Japan, so it amounts to me being correct.

I had an argument with my wife this morning begun because she was unwise enough to tease me that my Japanese hasn't improved in four years back here.  I could have made the safer argument that with two children and a job in English it's not like I had the time, but I set it off with honesty: why should I learn more of the language in a place I am not welcome, nor is our children's membership unremarked, and that the only interesting Japanese people I've met who did not speak English well spoke another second language?  Her real anxiety is that I will not help encourage our children to learn Japanese, as well as English, when we move back to Toronto.  We'll always have different motivations, but I have yet again assured her I will: there is value in knowing your heritage languages.  I made it clear that for my son to know how to behave, and for my daughter to take no shit, I will not mince words about what I think of gender relations in Japan, and the acquiescence of both genders to the state of them.
Posted by Ἀντισθένης at 22:28