Visiting Montréal, from Toronto, from Tokyo.

This is a follow-up to my re-impressions of Toronto, sadly as close to a home-city as I have, after I went to Montréal for a few days, which is where I spent five university years.  Talking about these cities, I mean the oldest parts of the city: within 5km of their city-halls.  Everything else is just a fucking suburb.

Toronto is an American city.  Torontonians aren't going to like to hear it, but there is nothing in Toronto you cannot find in a dozen American cities, including right-wing populism in the inner and outer 'burbs, no idea how to pursue 'city-building' and a focus on car traffic to the expense of anything intelligent.  I take that back: I should not slander American cities, many of which are fixing those things and passing Toronto by.
Montréal is called 'European', but it isn't: but it isn't American.  It isn't ROC ('rest of Canada').  Neither is it 'Québécois': it is what happened when Anglophones, Québécois, Natives and Allophones spend a few hundred years as the gateway to the interior of Canada, layering the palimpest.  A reason Toronto is boring is that the palimpest is thin.  When you say Montréal is 'European', you mean it is interesting, long inhabited and worth knowing.  Can you think of a novel where Toronto is a character?  New York, sure.  LA, if it is dystopian.  Montréal?  Yes, in both French and English.

This time out, I am going to look at Montréal in light of Toronto, but also of Tokyo.  "I will not get into the politics or planning, which most visitors are happily ignorant of."
- Montréal looks about as messy on the street as Toronto, but it does not stink of garbage as badly, probably because they do not collect the garbage on the curb.  The best thing is that the urbane areas of 'Atwater' through downtown, 'the old city', 'the Plateau' and 'Mile End' are contiguous, along with 'the Mountain'.  Toronto, no: a frustrating drive, dangerous bike ride, or unreliable streetcar ride.
- The streets are as poorly paved and full of parked cars as in Toronto, but there are more people on foot and on bicycles.  This, more to do with the fact that Montréal drivers are not as incapable and selfish, than with infrastructure.  However, most cyclists are riding very old bicycles, which leads me to think there is a theft problem, so nobody wants to invest in a newer bike.

- I only took transit once, the Métro.  I had forgotten how dark the stations are, how rattletrap and narrow the cars.  I never used it for the daily commute, so I cannot say much.  And yet, the ticket takers gave us no help at all with our baby carriage, and  closed up the booth when I approached: similar to Toronto...

- It ain't Tokyo, but food is cheaper and less pretentious than in Toronto.  Plus you can get a decent freaking bagel.  The line to Schwartz's is too long to bother now.  The coffee in Montréal is not so much better, so much as more rarely poor.

- There is far more street life.  It is a city where people look alive to serendipity.  Nobody in Toronto makes new friends on the street, or in a bar: work, church or university is it.  The people I know who have moved to Toronto often complain about this; coming back from Tokyo I have made a few friends: 'friends of friends' who I knew from school...  In Toronto, you can tell everything about a person's character by their complexion, the way they dress, what they drive and where they are found.  These signifiers only take you so far in Montréal, because people are individuals.  In Toronto, even the 'inter-marriages' never deviate by class, education, wage or age.  I was uplifted by the odd-couples I saw in Montréal: guys with older women, younger Francophone women with older Jewish men, homely women with metrosexuals.  You just never could tell.  Makes you think they might be in love.

So yes, I regret leaving Montréal for Toronto at all.  It was a poorer, more linguistically divided, Montréal then, and you can never tell the future.  Alas.
Posted by Ἀντισθένης at 05:44 3 comments: 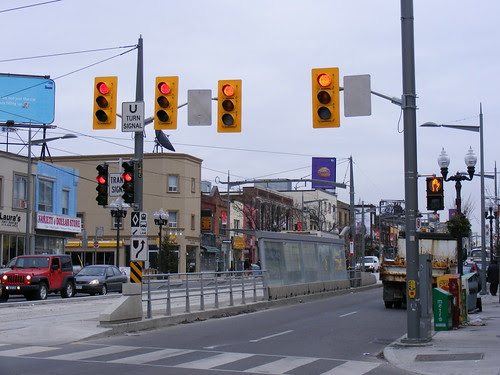 I am resident in Tokyo, but am visiting my childhood home outside of Toronto for the month of July; so I am a Canadian, but my eyes are a bit different to Toronto, since I now view it as a Tokyo resident. I want to point out what many visitors will notice strongly, that locals take for granted: I will not get into the politics or planning, which most visitors are happily ignorant of. I will alternate good with bad, and see if I can keep it balanced.

- Toronto is full of tree cover and parks
- the streets are full of overhead wires
- there are garbage receptacles on the street, which are vanishingly rare in Tokyo
- and yet there is more trash on the street in Toronto
- the streets stink of garbage in the pedestrian shopping streets

- it is easier and cheaper to find parking

- half of the lanes are full of parked cars, which remain free to traffic, in Tokyo
- the roads are full of holes
- repairs must take forever, as there are blocked lanes with nobody at work in them

- people do not ride all over the sidewalks, as in Tokyo
- it is dangerous to cycle here, sometimes even to walk, and yes even to drive, statistically

- servers can be more creatively helpful
- servers are less professional and reliable
- portions are bigger
- adults should not eat that much
- meals costs much more, after the 30% for taxes and tip
- some cafés are very good
- most coffee is very bad

Just a few initial impressions. Your experience may differ. I clearly have little love for Toronto... because I know Tokyo, and Montréal.
Posted by Ἀντισθένης at 00:04 6 comments:

I had another bit break on my bike today. 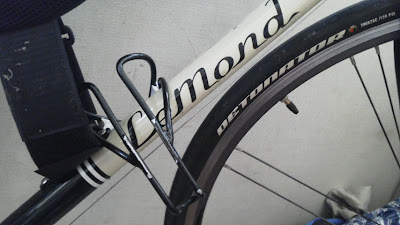 That is a Planet Bike Button Cage, made from aluminum.  I have spent money on bottle cages in plastic and aluminum, which have either: broken, or rattled against my Kleen Kanteen bottles.  One of the biggest disappointments was the Kleen Kanteen bottle cage, which though it fit well, was ugly, and snapped in the cold.  Like anything else in cycling, aluminum and plastic (carbon fibre) are not dependable, and steel is.  So is titanium, but the premium...

The ideal bottle cage for a steel bottle is steel (I won't drink from plastic): won't break, is quiet, looks decent and doesn't cost a fortune.  The type that best does this is long, as the Kleen Kanteens are, bends to fit, is not open to the frame between the mounting bolts, and grips in a hug, as opposed to this type, which rattles plenty. I think it will be the second-last one: simple, not heavy, quiet, adjustable, and won't catch trouser legs (not that I ride in normal wear much).

P.S.  Yes, I know I should not have attached a frame-bag under the bottle cage, but it works well, and I'm going to do it again.  The cage should be over-designed enough to take the minimal lateral force of a frame bag.
Posted by Ἀντισθένης at 14:17 2 comments: