God help me I won't buy a car just to canoe.

I want to paddle a classic canoe route in northwestern Ontario: the upper Missinaibi, but fuck me it's expensive to do.  Not even worth getting a boat, unless I am going by car: shipping by any method is insane.

I have to get to Mattice, get a night's sleep, get a boat and lift to the Agawa train at Hearst, take that down to Hawk Junction, paddle the river back to Mattice, get rid of the boat and get another night in a hotel, and take the bus all the way home. 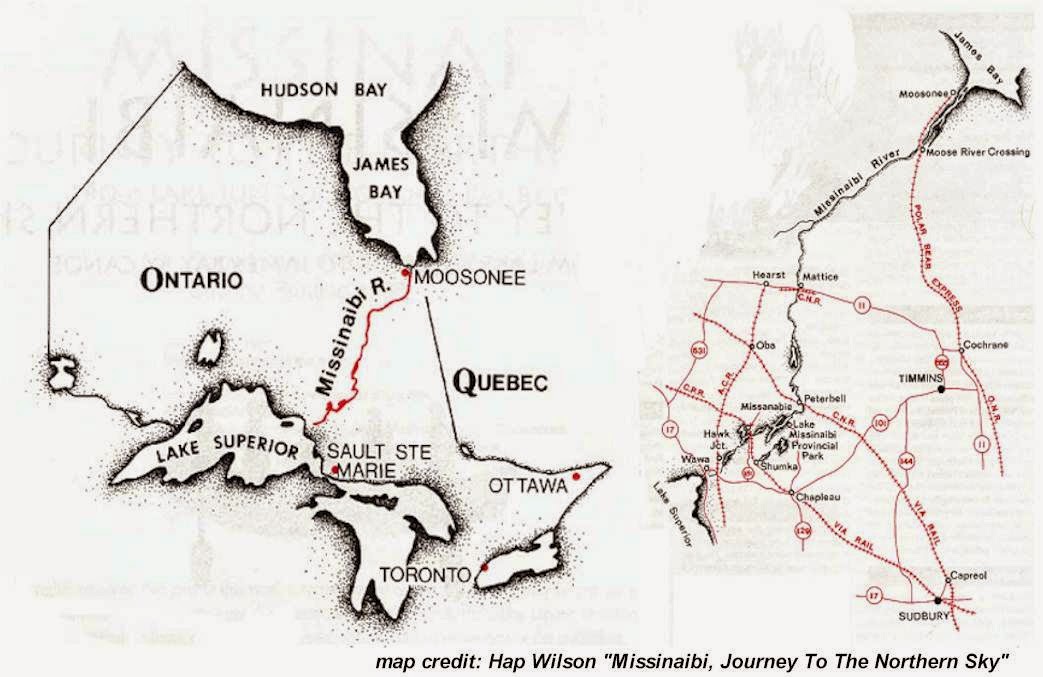 Solo via Peterbell approx.  $1000 (not including boat)

And which canoe would I get (in Royalex/lite)?
Nova Craft Pal - for solo, or lighter tandem loads, flat or whitewater to class II
Nova Craft Moise or Esquif Canyon - tandem for rivers with bigger rapids
Prospector?  Too beamy.  Want less beam than a Prospector, but less rocker than a true river boat...
Posted by Ἀντισθένης at 09:34 No comments:

The wife takes the kids to Tokyo for most of July, from Toronto.  I get out of going to that armpit climate, because I can claim I am saving us money: almost $2K for the ticket in summer, and up to another $1K for various expenses there.

So, what do I do instead?  I'm not sitting in fucking Toronto when I have a month to be anywhere else.  My idea is I can justify anything that costs no more.  What do I do with my time?

Touronism
Probably not, since it's not my thing, and much less fun alone, especially as I am long in the tooth and short in patience to do the 'backpacker' thing; and the rest costs too much money.  It's also more the thing she'd like to do with me, and the kids.  The other thing is the cost of flights to anywhere I'd do it in summer (Northern Europe): fuck no.

Cycling
I do have a road and a touring bike, and can and have done tours alone, albeit not long ones previously.  Thing is, besides the risk of getting hit, I get to hear fucking cars blast by me more or less frequently... for weeks on end.  Not so appealing now.  Or I can go somewhere more remote, but has enough of a road for my touring bike, which means I die in a 'Third World' country.

I could buy a fourth bike, and lose my wife.  Anyway, the off-road bike wouldn't work for a long tour, mainly because there are no long off-road tours rough enough to stop cars, smooth enough to ride bike, where all wheeled traffic isn't banned.  Too bad.

Hiking/Mountaineering
Well, none of my friends have the right combination of time, fitness and interest, so I'm alone again.  Bit of a theme there...  Nixes the mountaineering, but leaves the hiking.  Hmm.  Something where the flight is not more than a grand: Iceland or 'the West Coast Trail'.  Not the Canadian Rockies again, as all the good views are technical.  I don't do America.

Canoeing or Kayaking
Finally something that Ontario has!  I have done no little bit of both, and of them the canoeing of rivers appeals more.  The Great Lakes can get too ugly for a little boat fast, and it's not wise to be on them alone anymore, as I have kids to live for.  Besides, I'll get a wee yacht to do that in a few years.  Canoeing is a partner-sport, but it is possible alone with the right boat.  Oh... I don't have one.

That's not the biggest problem: getting one small enough to solo, but big enough to explain away as a family purchase is.  More, something that I can move without a car, and store without a garage.  That's impossible!  There is no canoe that's narrow enough to solo, wide enough for kids; sturdy enough for river tours, but light and foldable enough to pack in a bag.  It would have to be like a skin-on-frame kayak, but have a way to alter the frame to widen the beam.

PakCanoe 165 is a smaller wilderness tripper. It works well for two moderate size paddlers and gear for 2 or 3 weeks. The 165 is narrower than the 170 and makes a nice expedition solo. Wider cross ribs can be installed for greater stability.

Posted by Ἀντισθένης at 05:55 No comments: