Is very much worth doing, but like anything else in Japan, better done by minimizing the Japanese:
- access the mountains on weekdays, unless you like standing in buses on twisted mountain roads, and waiting in line up the side of a mountain
- ask yourself what's going to cost you less, the cost to your body of your camp on your back, or 9000y/night for a sleepless night in a hut
- hut dinners are too early and local cunts wake you at four
- Japanese snore, and loudly
- 'wild camping' is not allowed (and rarely easy to do, as anywhere flat and with water is taken by a paid site)
Weather:
- Rainy-season is a wash everywhere (a month of June/July)
- Forget the 3000m Chubu mountains, Tohoku or Hokkaido from November through May
- Much under 2000m one can hike year round
- make sure a tent is built for rain and humidity, and for wind if above treeline
- each 1000m of elevation is a month colder, more or less, so dress for it
Fuji:
- Fuji sucked
- it will suck harder now that it got UNESCO
- if you must go to Fuji, do it as a day hike a few weeks out of official season (official season is July and August) as I did
- its huts are the biggest suck
Information and links
- make sure you know the train and bus schedules for your trip before going, leaving and returning, as many of the train and bus schedules get sparse in the mountains
- you need maps, but none are in English, so get 'yama-to-kogen' maps at any large bookstore or outdoor shop (山と高原地図)
- 'Hiking in Japan'
- Lonely Planet's 'Hiking in Japan' book
- Japan's '100 Famous Mountains'\

Shops:
- Koujitsu-Sanso in Shinjuku or in Ginza
- Kamoshika Sports in Takadanobaba

This is what Japanese mountains can look like, several days' hike in, mid-week. 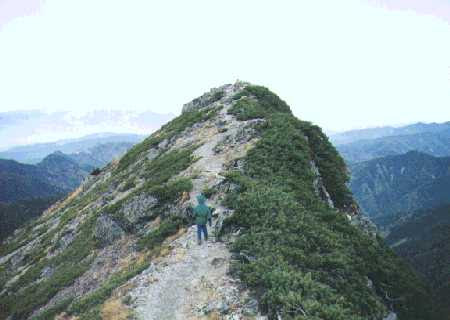 I'm not a nihilist, you moron; thanks to you, a misanthrope.

I have been dealing with stupid people this week, and most of them aren't Japanese.  As a child, I looked for answers to the ills of the world.  I believed that a strong enough teaching, whether imagined or joined by me, could solve the ills of humanity.  I learned my Catholicism as an innocent; I studied Buddhism and other options in university; I am a philosophy graduate disappointed that a faculty is history of, rather than practice of, philosophy.  I learned a couple of other languages, though not well, and lived in a few different cultures hoping to find viable alternatives to the deficiencies of my own.  What a naïf.

The problem is the species.  Fuck humanity.  There are (vanishingly few) decent individual humans, and I expect my children to become them, but I'll warn them off trusting the species.  Humanity is no less venal and deserving of extinction than it was through all of recorded history.  This week like every other week of my life.  It's taxing.


Casual Racism
Ever noticed that the worst racists are the ones ignorant of their own racism?  Worse than genocidaires?  Well, maybe not, but they sure do enable when the genocide warms up.

A particularly self-satisfied teacher at my school, ignorant of her own obtuseness, blamed the NDP gains in the recent election on the 'Middle East' vote.  You don't have to know anything about Canadian politics to know this woman has no idea what she was talking about.  In fact, considering she spoke about a provincial election and a federal politician, she had no idea what she was talking about even before she mentioned 'the Sikhs' as in 'the Middle East': not geographically, nor are they Muslims.  I suppose they are all beige.

Arististenes: "There is no way an Islamic vote did more than swing a few ridings: they are less than 5% of the population of the country."

Idiot: "But the politician wore a turban and he got elected."

These people have no guts.  We are all racists.  Fuck you, you are too.  I know what races and situations punch my panic button, and I step aside from myself and analyze my reaction, then and afterwards.  Most times I slap myself and realize that the man is just another person trying to get on with their day.  It's called 'metacognition', 'introspection', and more people ought to try it, because it allows one to less often behave irrationally: racist.  On the other hand, sheep prefer to swallow the 'blue pill' to not confront their own irrationality, and behave as a racist, so long as they don't have to address it.


Apathy and Transference
My school doesn't have a shower for staff (nor for students), like most schools in developed countries for some fucking reason.  As a cyclist that's annoying, but that's my problem.  However, I teach some extra-curricular and I'll have no shower after an hour of it in Tokyo heat.  I won't smell any worse than the salaryman on the train, but it isn't healthy for my skin, is it?  If I had thought ahead I would not have volunteered for an extra-curricular activity under those conditions.  An idiot, I volunteered for one that would be good for the most students.


'Never volunteer for anything.'

The solution is sento or a public gym, but why is this my problem?  The school is very much for-profit.  Oh, we have a 'board of directors': that would be the owners who are never on campus, know nothing of the curriculum, nor care.  There is money for what they want, but neither enough to keep good staff, nor to fix the campus (about which I can't say much, or give away my school).  There's been no money for showers, and the kids reek for it.

However, 'nothing ventured, nothing gained', so I sent out a proposal as politely as I could for gym memberships for staff who sweat on the job, or a shower installed, whichever comes cheapest.  Much false deliberation and the answer you can expect.  I told my administrator I was an idiot for taking on the activity, wouldn't have if I had thought about it, and was not going to quit but only for the kids.  The PE teachers of my school loved what I was doing, but do you think they stuck out their necks, even a little?  If that were the end of it...

You don't have to give much opportunity to your superiors to lose respect for them: my administration tried to make this about my dissatisfaction with the school.  First, the lie: You are the only person who's complained about this'.  I know this to be untrue and said so.  Second, the self-justification: which I was offered, but I told the administrator not to bother as it was only about money, and don't patronize me.  'Honesty is [not] the best policy', but I am not invested in this school or this country, thank god.  Third, the transference: which was so gutless he spoke generally about how some people are dissatisfied no matter where they work.  Look, I only asked about a shower.  I did not bring up the fact that the school fees are absurdly high for the benefits to the students, the school facilities, or wages to staff, so it's pretty clear where the skimming goes.

I suppose a 'blue pill' is what you take to administer a corrupt institution; rather, administer the orders sent down to you by the rentiers.


Japanese
Yes, not only Gaijin.  Japanese 'teachers' (as if they teach) use my classroom every day and leave the desks in random configurations.  'Leave things as you found them' is not culturally specific.  That is merely annoying.  What sent me over the edge was some cunt erasing all of my notes on a whiteboard that I was using for several sections of a class I teach.  It's a double-sided whiteboard: one side was blank.  Since I am dealing with idiots I worded my email for idiots:


Double-sided whiteboards have two sides: one for me, one for you.  If you cannot figure out how to make the board flip over, you might notice the wheels on the bottom allow you to roll it to the other orientation.

Not trusting in any spark of self-awareness, I now flip the board to blank every time I leave something.

*A funny thing.  Colour blindness, which is to say one of the various red/green permutations, runs between 7 and 10% in the US among males, though it varies among ethnicities: very rare in girls due to the benefits of a second X chromosome.  I had a G5 class in a whitebread suburb of Toronto where a test like above was shown in a text, with different wording, and five boys couldn't see a number in the circle: 30% of them.  Had to write a bunch of notes to parents, not that it is a life-threatening condition in any way.
Posted by Ἀντισθένης at 16:40 3 comments: