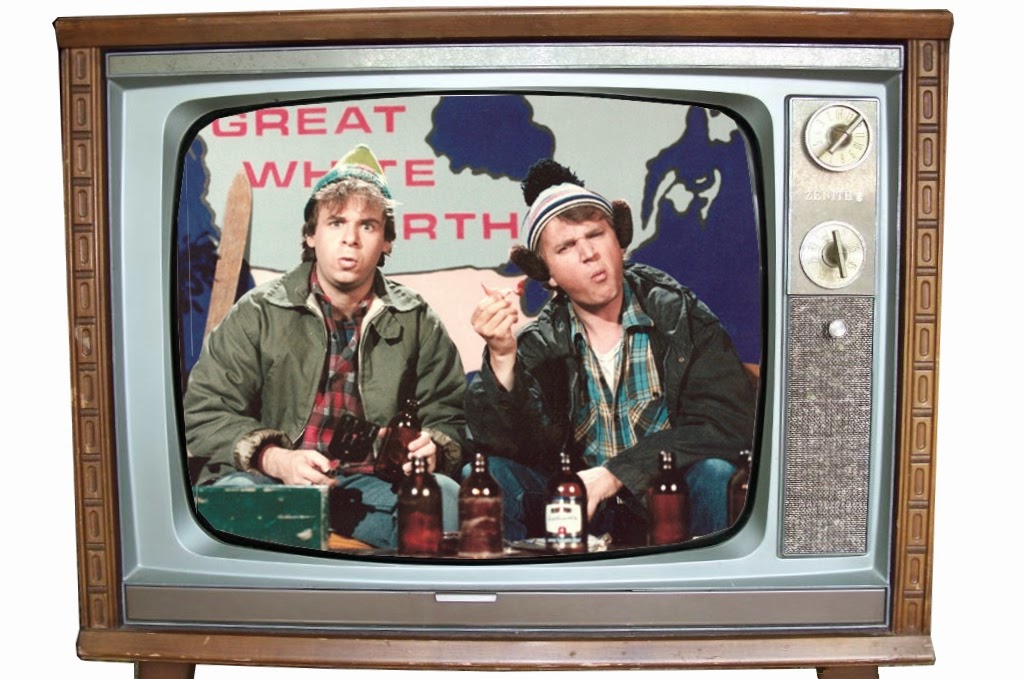 Cable TV cord-cutters, anyone? Anyone done the HDTV antenna and/or Internet route?

Our new (Toronto) building only has Rogers, which we hate, and no sane Canadian will disagree.  Their cheapest package is $40 and gives us feck-all, and the next option worth considering costs double and adds precious little. We have Bell cellular already (and can add Internet but not Bell TV, because stupidity*).  I want to live long enough to see the cable business die, and Rogers go bankrupt.  Who has a land-line anymore?

If it were up to me, no TV, minimal online streaming.  That's how my English media rolled in Japan.  In Japan, reading I could not do without; TV shows just jerk you around to watch more commercials; I missed watching movies, but not enough to do much about it.  My J-wife watches too much TV, even though Japanese TV's about as pleasant as a root canal done by a vaginaless sex-bot with a dental drill voice, the dentist's office painted in bad trip on 'Tina'.  So of course she wants Japanese TV 'for the kids': NHK.

We can get one Japanese TV channel from Rogers or Bell for $20, on top of the cost of any other service: $40 for the most basic, which has only what we'll pick up free with an antenna from the unit we have high up, facing the right direction.  So, fuck cable from our last choice company: we're going with a 'smart tv', HD antenna, Netflix subscription**, and a 'Wavecast' box sending shows from her mother's for Japanese indoctrination: hooks into Japanese cable input, and Internet for output including cloud storage PVR.   I might buy our own PVR to store English shows, except why bother when I can watch from Netflix on my own schedule.

I'm going to be run out of this most conventional city for breaking the PB mold:
- no cable
- no car
- no diet of sugar
- no half-million-plus mortgage on next to no money down
- no willingness to line-up at 'happening' restaurants

*Not available in building, even though good Bell Internet is, and the speed is high enough to support Bell TV which comes via Internet.  Rogers bought off the builder?
**Of course I would never use a proxy to access the US' much better service...

Teachers in Ontario aren't given computers... 2014? 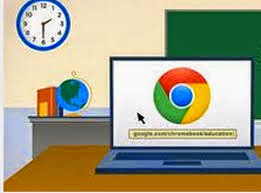 Anyone have experience with a Chromebook?  I need something dirt cheap for simple tasks to teach my class as my school board's so fucking stupid teachers don't get a computer of their own in... 2014!

My principal actually repeated the same imbecility used when I started in 2000: 'computers are for the children, not the teachers'.  Funny they expect me to complete reports on them, check my board email, and more, yet stolen minutes in the computer lab when someone else's class is trying to find computers still working doesn't cut it. Principals must be attending the same administrator's seminar as the first moron who repeated something at me too stupid to ever exit my mouth in earnest.  It was stupid fourteen years ago, and the expansion of the web hasn't made it less so, you know?

Entering a new school, was it too early to give my principal my 'are you fucking stoned?' look?  Too bad.  Good impression gone, as if it would have lasted.

Advice on the cheapest tool to use web, Word and Excel, please. I refuse to put any real money in.  If it isn't stolen or broken, it's still too beyond belief it isn't standard staff equipment for me to pony-up much.  There's going to be no personal data on the thing, most items stored online (no children's surnames or other identifiers).  Thanks.
Posted by Ἀντισθένης at 11:36 3 comments: 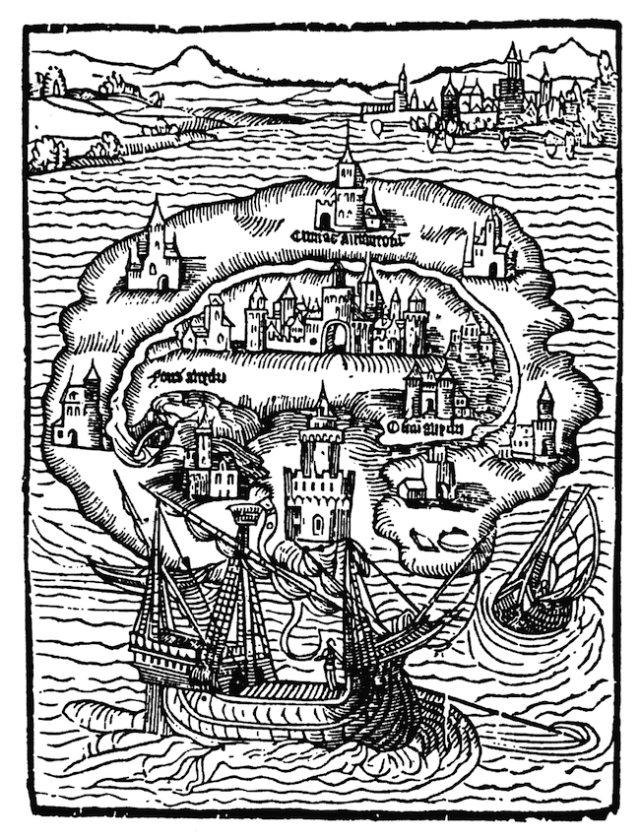 Turns out More's Utopia was Copenhagen.  Never been.

My perfect city could be made of a combination of others, and I'm wise enough to base it only on those I've been to:
- Vancouver's geography
- Toronto's seasons, tree cover, diversity and employment opportunity
- Montréal's je ne sais quoi and affordability
- London's museums and history
- Lisbon's architecture and people
- Bangkok's temples and river
- Singapore's food
- Hong Kong's ordered chaos
- Tokyo's transit, density, dining and drinking culture
- Osaka, because Osakans aren't Tokyoites
- York's and Québec's extant walls
- Xiamen's Gulangyu, a car-free ex-foreign concession island with lived-in pre-Pacific War poly-European architecture

No use for Washington's imperialism, Ottawa's tedium, Chicago's Mid-Western boredom (but maybe its waterfront), Taipei's legacy of deluded grandeur (apart from The National Palace Museum), a single thing from LA, or much from cities under a million.

Tokyo wins most, but the climate and the concrete hurt its standing badly.  Toronto nearly as many, but fuck it's uncool.
Posted by Ἀντισθένης at 13:23 2 comments:

I had this breakfast.  Who eats like this, with regularity?  After four years in Japan, this bloated me for the rest of the day, 6'1", 180lb man though I am. 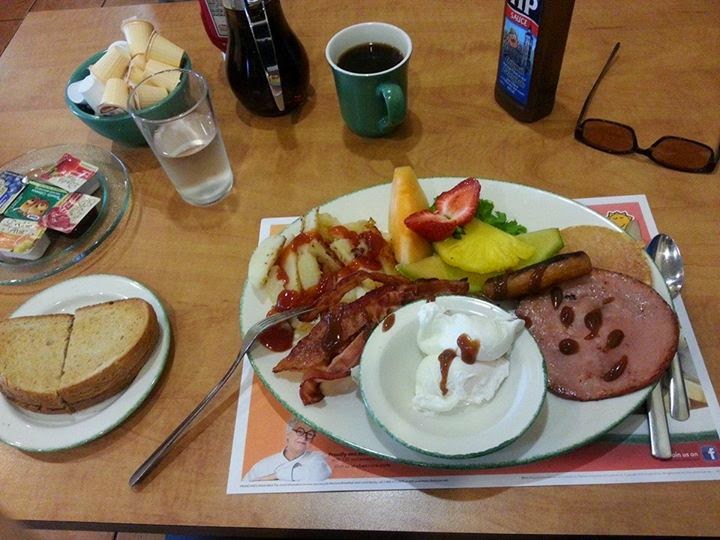 Let's get your umbrage out of the way, if you're feeling it.  I do not care if you, an individual, are overweight.  I do not want to hear your elaborate denials, but other than that, have nothing against you at all.  I have a real problem with entire societies morbidly obese and in denial.  That's where we are.  I have written this before.

Now the Japanese do over-salt everything, not that they'll admit it despite their basic foodstuffs based on salt; however, it's a great country to live in if you think deserts might have some flavour not overwhelmed by one taste: SWEETENERS.  In half a month, it's gotten to the point that we dread going out to eat anywhere, or eat my mother's meals (at over seventy she ought to know better) because we're going to feel bloated and sickly by the end of it.  It's not only portion sizes, which seem to be 150-200% of Japan's, because people are bigger here (even in their BMIs), but that there is sugar, and much too much of it, in so much.  It's a new normal.

So is size.  Jesus but everyone's huge.  Fine, not everyone, but a far, far higher proportion than in Japan: where 'metabolic syndrome' isn't rare.  Now don't give me crap about different body types, because the NE Asians here are also rotund often enough.  I've had to explain to my J-wife, who'd lived here years, that no, few of those women are pregnant, but the only way to tell is by shape, not size.  It's a new normal.

More disturbing is what it's done to my attraction to females.  As I'm vanilla apart from a preference for Asian (which has itself become a norm) I'd always been attracted to females near my age, and in my youth slightly older.  Well, now that the norm is for women from late teens to run to huge and cellulite* (without the reasons of age or pregnancy), and that the body-fat percentage needed to start menses is reached a half decade earlier than when I was a teen, the mid-teens have the figures twenty-somethings once had.  It throws one off, and disturbs, for a fine figure to be topped with a child's face.  It's a new normal.

Fuck the normal, and its abject failure to take any responsibility.  Rather society flaunts this excess, seated in trucks, wearing camel-toe bearing yoga pants that've never seen exercise, downing a thousand calorie 'coffee' with one hand, and scratching thrush with the other.

The building is LEED

As often, this post starts from spleen vented in other communications: an email to a friend, a real estate agent, who helped us find a rental condominium in Toronto.


Toronto's Midwestern attitude to bicycles drives me insane: plaything only, never anyone's vital means to commute.  I mean, the building is LEED, so why's it so much easier to park cars than bikes (reality)?  You know, and management has to know, there's not a few bikes in units, going up and down elevators.  I don't mind using a back entrance, which I've done elsewhere surreptitiously, but my most expensive bike is staying in with me!  Even the other two bikes would get covered in road filth in the garage, because there's never a wall/door for the bikes.  I started keeping my cheap bike in my unit at a place for just that reason.  What do people with child trailers do?

It would be nice if management allows bikes in elevators and out a back entrance, rather than turns a blind eye to what more than 10% do, leaving us to sneak around guiltily for something there's no reason to feel guilty for.

LEED, so fucking 'green'. Bike racks in a shitty open parking area and a dozen unused electric plugs for cars help up the score, don't they now.

Of course, 'forgiveness is easier to get than permission' and 'discretion is the better part of valour'.

You'll tell me I should instead rent a house (have you looked at Toronto rental rates?), live in a condominium that allows bikes in elevators (few such) or live in a regular apartment building (without air-conditioning or en-suite laundry, with two adults and children).  I could point out that the rules are discriminatory, and there's no way I'll damage facilities with my expensive road bike as much as people's dogs shitting do, or obesity-scooters given by the state are driven into walls by their drones hopped up on Oxycontin.  I have a better answer: 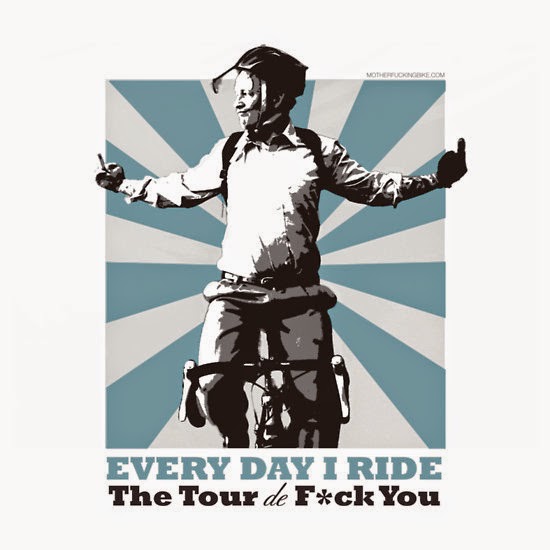 So I am home, or in Canada at my mother's at least.  Out of Tokyo after four years.  What is home?This is my hometown, but not the house I grew up in, which I'd left at eighteen in any case, and which I had loathed all of my teens: the town and the family.  Father dying helped a great deal, but that's baggage and we all have it.I've lived nineteen years in this Toronto suburb, one in another, one in St. Catharines, five in Montreal, four in Tokyo, three in a Tokyo suburb, and it must be eleven in Toronto.  What is home? For my heart, it is Montreal, but the heart is a fickle thing and not amenable to sense.  I have poor French, and I lived there in university for the most part.  Apart from what my heart knows, I cannot call it home, and I know if I lived there again I would be broken-hearted.Common sense tells me it is Toronto.  It isn't any of the Southern Ontario towns I've lived in.  Even as a youth I did not feel that they were home: too limiting.  So is Toronto, though a little less.  It may be a home, but there is no love lost there.Tokyo?  Or Kanto, at least?  A second home, but they're never going to accept me.  At best I am an odd-looking cousin.  An interloper.  Besides, Tokyo like Toronto is full of assholes: there are better places in both countries.I do not have a home city.  I have a family, and they are home.  Where we live is just background to that.  If you cannot hold yourself apart from your surroundings you are as coarse as those who cannot from their emotional state.  Better to be a bit adrift than capped.
Posted by Ἀντισθένης at 22:19 11 comments: