"Sometimes, you gotta not assimilate." 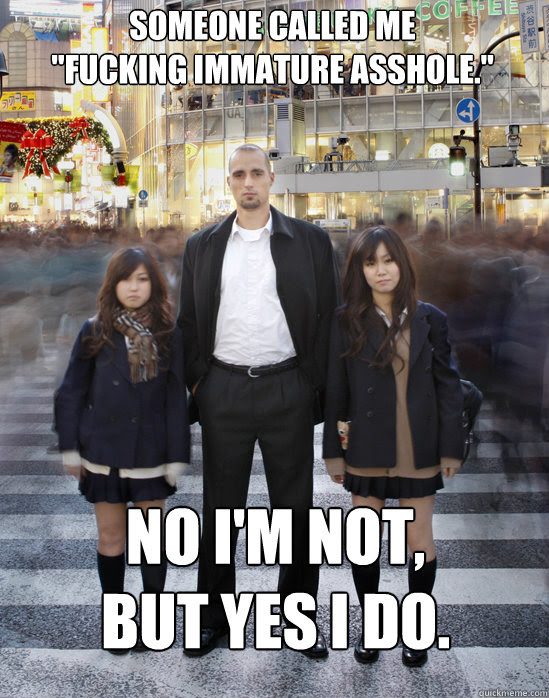 No, don't think about the caption too hard... as it were.

I'm on the train to get Hybrid II's Japanese passport, because I cannot get Canada's until her birth is registered, which takes a year!  I have two-month old her bound to my chest in an 'Ergo'; the J-wife's got toddler Hybrid I in a baby carriage.  None of the locals makes so much as a glance from the 'courtesy seats', despite most of them being able-bodied and in their twenties.  This has long ceased to surprise me, and this time it doesn't even bother me because the J-wife's not bearing the weight of either kid, and the one I've got weighs nothing more than what I used to be able to eat at a 'tabehoudai'.  Hell, I've seen a stupid twat flirting with her boyfriend while he ignored two pregnant women standing in front of him.

A decent person in the 'courtesy seats' would have offered anyone a seat schlepping a child, even 6'+ me, and I would have demurred and thanked them.  For the first time though, I see a white 'man' acting as much a twat as the locals.  Worse, he's witless enough that he doesn't pretend to be asleep or stare at his shoes.  Or is that better?

So he doesn't have manners, or he doesn't know how to decide if it is more polite to offer a guy almost twenty years older a seat, without implying the guy is infirm, maybe.  'Benefit of the doubt' and all that.  At the next station a petite mother with a kid in a sling, a daughter not out of elementary, and a grandmother well past retirement age, enter and stand right beside him.  Nada.  No, just a cock with as much gel in his hair as the local 'men'.

There is only one person who's looked cool with visible hair gel. 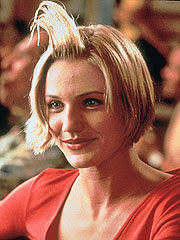 So here's the warning signs to flee Japan for male Gaijin who haven't decided to assimilate to Japan with the worst local characteristics:
- you don't stand up for people entitled to the 'courtesy seat', no matter where you are sitting
- you chain smoke in restaurants beside people who don't smoke
- you cough/breathe/chew with your mouth open
- you fart in enclosed spaces
- you fuck your students under eighteen (mine was twenty and I wasn't yet thirty then...)
- you have the silent camera app on your smartphone
- you pay for sex
- you think happoushu is a great deal

Go home before it's too late, or stay here forever - so much the better for us leaving
Posted by Ἀντισθένης at 22:47