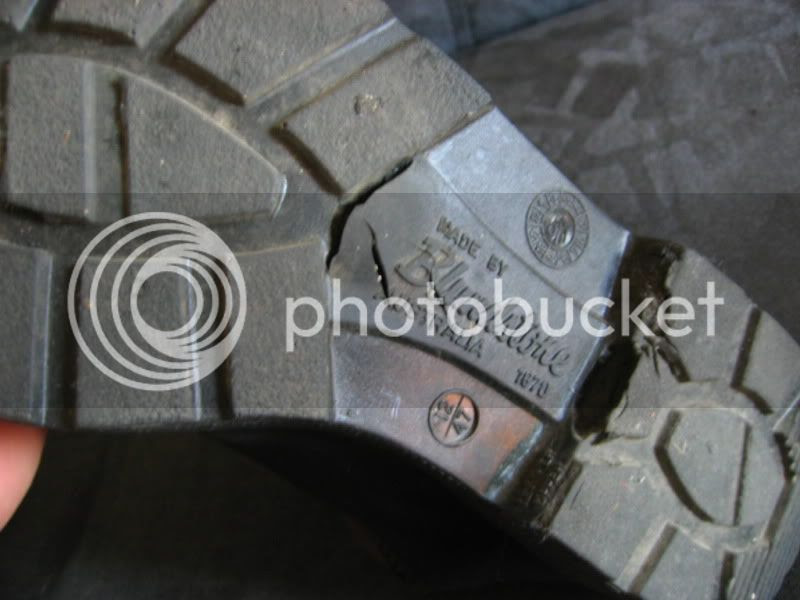 There's no reason for soles to split and crumble, except it's an inevitable part of sending your manufacturing offshore.  By all reports, now Doc's also blow entirely, for the same reason.*  China is the only place I have seen workers hammer in screws.  Company PR both during and after laying off people making a living wage in the brand's country of origin will deny abandoning their workers to poverty, and eschewing quality, but the facts stand.  The only encouraging point is that we left-wingers no longer need to make humane arguments to people who don't care, instead: offshore products suck.

Blundstone's PR is to blather their soles can suffer from 'hydrolysis' if left unworn too long (summer), or in a place too hot; however, I have had plenty of other boots survive a Japanese summer.  A shoe shouldn't degrade from storage in a dry place.  Heat?  Fucking boots were supposed to be for Aussie stockmen.

I've had both black 'chisel-toe' #63 for five years and original brown #500 four.  I take very good care of my leather: boots and bikes saddles.  The soles of the 63's are dead; however, the narrower fit fits my foot far better than the 500's, or the 558's I'd considered replacing them with, so I looked into resoling them.  A resole is quite expensive: about 9500Y, $100CAD, or just as much if I mailed them back and forth to a US cobbler to fix them: half the price of new, full price, but a lot more if compared to getting them on sale.

I'm getting the 63s resoled.  I did look into buying soles and doing the work myself.  It's a surprise how much of your own handiwork you can do, if you don't require perfection the first try.  The Internet makes it easier than ever to erode the wall of mystery surrounding technique.  The reality was that it would cost me half the going rate to do it on my own, and the results would be disappointing.  I'm getting the 63s resoled at a shop for these reasons:
- they fit better than the 558s will (pattern of my 500s)
- resole is still cheaper than new
- throwing out good uppers is a crime
- the new soles will be better than shit Blundstones are now shod with

Good footwear, well cared for, ought to last nigh to indefinitely, apart from worn soles which must be repairable.  I'm going to start paying real money for footwear made nowhere in mainland Asia.  I expect it will last long enough to be better value.

*Solovair are still made in the UK, on the same lines as the old Doc's, by the same manufacturer.
Posted by Ἀντισθένης at 23:58