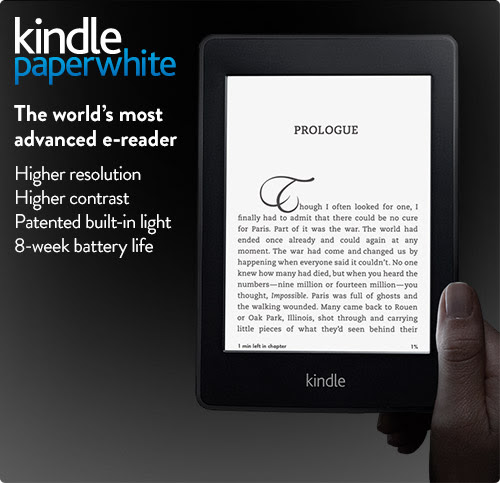 It's finally, and exponentially, much easier to get reading in Japan, but with or without one.

I was living near Tokyo in the mid-nineties when there were few places you could get books new or used in English.  Sadly, it is just the same storefronts now.  They are no better and are going to get murdered, and deserve it.  The Internet was in its infancy then too (not that Japan has or will catch up on any format but mobile Internet).  I'd have to go down to the city from Saitama and load up a backpack of books, taking in a backpack for trade-in, which they no longer do at the used places for the glut of paper books left here by departing Gaijin.  A 'blink of an eye' after Amazon Japan made it easy to get English books here, now you can do it via eBook: initial nominal investment followed by cheaper books in an easier to carry format than a bookshelf.  So long as you read some Japanese, despite their 'English' page option.

So why this and not a tablet or 'Smart phone'?  It is simple to use back home once I switch the location at the Amazon site, which is not so easy for any other platforms bought in these fucking Galapagos: Japan.  It's cheap.  The battery lasts forever between charges, which also means the battery will last indefinitely to take charges.  We have not known at any point that we were staying in Japan long enough to get involved in a multi-year cell contract, or to be worth buying a device that may turn out unusable in Canada.  Unless I'd pay 5K/yen/month for another 3G plan for a tablet, or go to the trouble and expense of a better phone I could use to tether it to the Internet, I'd have to rely on finding wi-fi in Japan, which is a fucking joke (Google if you must).  I need to read more books and surf less.  I want a device I can afford to get broken in travel, or lose, and has no personal information on it.  If we find we are staying I'll just get a decent phone I can use for Internet, not lug a tablet everywhere.  I like eInk better than lit-screen on my eyes.  My best friend, the IT guy, says it is his favourite piece of tech.

Nothing's ever simple here though.  Amazon misled the public on the device's scarcity: was told it would be delivered in four to six weeks, but got it in two.  Given wi-fi in Japan, and for the battery, I am keeping it on 'airplane mode', and loading my books via my laptop, but you do need to sign in wireless initially for some goddamned reason.  We have a landline, because we are cheap and do not move the laptop, and do not have a tablet yet.  Got a dozen wi-fi signals in my house, but the Japanese keep them all locked down; in Canada I'd get a few open ones.  Tried the free Yokado (7/11) wi-fi, but it kept cutting out.  Starbucks works!  (When it asks for your email and password, they do not mean the password to your email, but to make a password for the wi-fi sign in).  You can do what the Japanese would do and pay 150% for the 3G version, but the Japanese are trained to take it unlubricated...

It's a bit of a quirky device, as is the way to get books on it from Amazon without a wi-fi connection.  As a book it works pretty well, though not as well for paging through of course, but much better for text by weight and volume.  If it cost much more I'd be annoyed at its limitations, but given that you can get some books free or near to it, and all other books at a fraction of their paper-price, it is a good deal as a portable bookshelf, or should I say, library.  I have the entire Bible on it (atheist, but cultural reference is valuable), two English dictionaries, an English Grammar, a Japanese dictionary, the complete Shakespeare and several other complete authors, and a dozen other books, and have used less than a tenth of its space.  Be aware some of the free books out there have no indexing, which makes them unusable.  Read reviews.

Recommend it?  Do you read a lot of books?  Do you live outside an English speaking country?  Do you never plan to get used or library books anymore because of possible lice infestation?  Do you go on long trips and are tired of carrying several books at a time to ensure reading?  There you go.

Some tips here. Free books here, and here.
Posted by Ἀντισθένης at 19:43